Nuns on the Bus Defend Poor 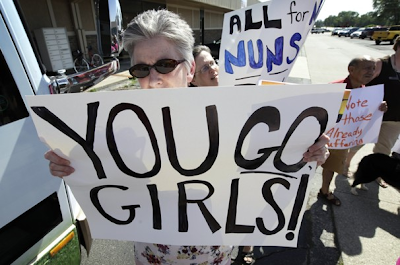 "Nuns on the Bus taking US by storm."   Given the Derecho, News 24 reporting from Harrisonburg, Pennsylvania chose an odd headline July 1 for its story of  a tour which started in Iowa on June 17 and reached Richmond today.

The trip, sponsored by the Catholic lobbying group Network, headed by Campbell, came about in May after the Vatican released a report that charged the Leadership Conference of Women Religious (LCWR), which represents most US nuns, of "radical feminism" and not focusing enough on fighting gay marriage.

My friend historian Marian Mollin drove to Richmond to greet them.  Tomorrow they finish up in DC.  I'll be updating this post tomorrow am.
Posted by Beth Wellington at 7:03 PM