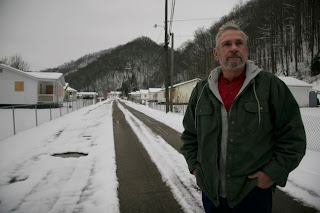 
"They have taken everything away from me and now the final insult is, in what should be my retirement years, area coal companies want to buy our life's work and destroy it and run me and my family out of Twilight along with everyone else that lives here, just to mine the coal."
--Frankie Mooney

I thought folks who read this blog would want to know that Frank Mooney died yesterday. He had suffered from crushed lung in a mining accident and recently had to withstand coal and blasting dust from three mtr sites near his home. When he had knee replacement surgery, he suffered complications that proved fatal.


I am sorry to say that at 5:30 am this morning Frankie passed away.


He went into the hospital to have knee replacement surgery and a blood clot went into his only good lung causing him to have a massive heart attack. He has been on life support now since the 11th...


We at OVEC are so thankful to Frankie and his family for allowing us the opportunity to purchase their home place to protect it from the impacts of MTR. Frankie has been instrumental in the work that has been going on RT 26.


He will be missed but not forgotten.
His work in Twilight will continue.

The following information is adapted from OVEC's site, www.mtrstopshere.com, where you read about the plans to save his family land and the town of Twilight, WV from obliteration via mountaintop removal (mtr).  It would be great if there were conservation easements and/or further purchase that could get the family the money so there was no need to sell.


Frankie Mooney was a 40-year UMWA member with 22 years of experience in underground coal mines. He lost a brother, an uncle and his Dad to "accidents" in the mines. He was permanently disabled from the impact that mining coal had on his health. He lived in the town of Twilight, WV all of his life, on 9 acres that his family has occupied for generations.

The area coal company offered Mooney $775,000.00 for his land, which included the mineral rights and serves as a buffer between coal company land and the town of Twilight. He knew that this would be a strategic buy, since area coal companies, including Massey Energy, are attempting to depopulate all of Twilight and wipe it out forever, as they did Lindytown. If business continued as usual, Route 26 would be gated off, becoming company land for miles beyond Twilight.

Moonie proposed to sell his land to OVEC, an organization which has the resources to fight back against the coal companies. He was willing to sell for $125,000 less than he was offered by the coal company. In hopes that OVEC would raise the funding to help preserve his family legacy from the permanent destruction of mountaintop removal, the local communities, and the access roads to many area cemeteries, he was willing to live in and fight the conditions that MTR is creating. As OVEC emphasized, "Please understand that Frankie and his family did not have to make this choice."

Update:  When I corresponded with Dianne Bady at OVEC on 1/19/11, she let me know that OVEC has already purchased a portion of the Mooney property and a 900 square foot building.


He had already bought really nice wood siding for our building, and was planning on working on putting it up as soon as his knee healed from surgery. He was such a good man, such a shame he had to leave us so soon.

Frankie's words and photos will remain up at the site, at his family's request.  She said it was fine for me to pass the site on to others as long as I noted that OVEC is working on updating the site and that a partial purchase has already been made.


She also let me know that I could include the following:


OVEC is interested in purchasing more of the Mooney family property in Twilight, and we'll be looking into conservation easements as well. Our most immediate need is for funding to help us with our program work in Twilight. OVEC will be working with community members to try to prevent Twilight from becoming the next community depopulated by MTR - there are 2 Massey MTR mines and a Patriot coal MTR mine within a couple miles of our property and the town of Twilight. These MTR mines are headed toward Twilight. The small community of Lindytown (a mile up the road from Twilight) has already been depopulated and razed just within the past two years; Twilight is the next community in the path... 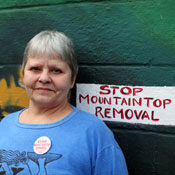 Again it was a note from Vernon Haltom, letting me and others know that Judy Bonds, our beloved warrior against mountaintop removal had succumbed to lung cancer. As I think of Judy, gone now barely a day, in my head, I'm hearing Bernice Johnson Reagon sing, "They are Falling All Around Me"

I can also hear Judy's voice, denouncing Massey at Marsh Fork, or laughing at the after-party for the premiere of Coal Country at the Blue Grass Kitchen in Charleston, WV.

Here's Judy in an interview from May 27, 2009 w. Fred Smecker for Toward Freedom:

My father and brother always said, 'Every law ever written about coal mining was written in our blood.' I'll always remember that quote. The industry has abused and oppressed our people for 140 years....most have a relative in the coal industry. This divides the community greatly, like a civil war almost - we get lots of threats and intimidation...it's basically a war zone, there are the threats and intimidation, and then the three million pounds of explosives used to blow up the mountains. If you have an industry that's been running amok for 140 years, you have an outlaw on your hands. They control the schools, the media, the politicians - it's virtually a dictatorship! It's interesting, the miners and other coal-workers who stick up for coal it's like the Stockholm syndrome; it's an abusive relationship. A psychologist would have a field day down here.

And, in case you're interested, here are the complete lyrics to Reagon's song from the album B'lieve I'll Run On (Redwood, 1978).  You can listen to a clip on Dr. Reagon's site.