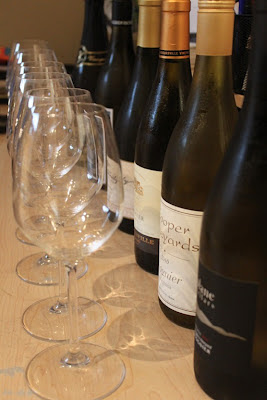 I need to provide a link for this photo, which comes from the blog of a British wine writer, transplanted to Florida, who recently visited Charlottesville for a tasting of Virginia Viogniers.  This post was originally published at 11:02 p.m. on June 30, 2012.  I last updated it at 5:53 p.m. on July 1 to incorporate additional content.  I still need to add some links, so check back.

I was wondering if we were having the Virginia Viognier wine tasting tomorrow at the home of friends in Roanoke who had lost power.  Another friend, unaffected by the Derecho wind storm that passed through Virginia,  had offered to host the event at her home.  The possible postponement or change in venue was a minor casualty of fallen AEP and Virginia Tech powerlines, due to gusts that reached up to 81 mph here.   Really minor in the face of death that some suffered elsewhere in Virginia.  Or  the devastation, lack of water and gasoline that friends experienced over in WV and Ohio--but more on that later.

To help out the original host and hostess a bit--who were contending with downed trees and lack of power and spoiled food--I thought I'd email the list of guests to keep everyone in the loop.  There were only a couple I didn't know and figured the hosts could forward my content on to those. I had neglected to ever make a list of folks' email addresses.  So, if I hadn't corresponded with them before, I went on facebook to compile the list.  But, when I looked, everyone had mysteriously changed their email providers from gmail or aol or yahoo or hotmail to facebook.


Doh, oh, that's right!   Facebook gave us a choice on whether to switch to the new timeline, at least for now. It turns out that Facebook, without prior permission or even notice,  has seen fit to change real public email that everyone had opted to list to a fake email that actually routes things as a facebook message.


I  hadn't notice any change in my own listing, because I only provide the URL for this blog, which then lists my public email. That in response to my being miffed by the photo-tagging facial recognition debacle, which I've written about.

So, we have yet another high-handed stealth change from Facebook,  after it promised the FCC to do better .  Just one more nail in the coffin of any remaining trust. The attempt to monopolize us within the garden is bad enough, although I can just message folks and ask for their real emails.  But why should I have to take that step?  And how many folks will just follow the path of least resistance?

Facebook email is actually the same as its messaging, which has, like other functions, an oddly vague time stamp I find useless for communication.  There's the additional problem that Facebook hides most of the content if your chat goes on for a while. So even if I didn't want fb monopolizing my data, for who knows what purpose,  I'd opt out.  Yahoo messaging crashes the whole email system, so I'm still using gchat, which I've used for years.  That, depite Google seeming boldness in  jettisoning of its former promise to its users to "Not Be Evil.

If the email switch were not not enough, when I open up Facebook, I am hounded by a message each day uring me to install its messenger, so I can chat from my computer.  That way facebook can track me even when I don't open its website.  Say what?  Can you spell "fugetaboutit?"

As a small consolation Facebook has substituted this for a message telling me how many of my connections are updating to the new timeline.  But that may be because it stalled at a bit over
100 out of 934.   (I have a big list because so many folks use facebook to communicate about the fight to end mountaintop removal coal mining.  And then there are relatives, my fellow literary writers,  journalists, and folks I know in the community, who are also here).

That sent me looking for another illustration, which I had to adapt via Paint to adjust the dimensions to a square, the better to deal with the oddities of the layout on the "new timeline." 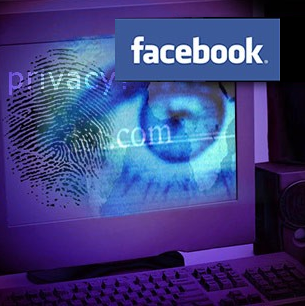 The original graphic, which I prefer, came from Eric Qualman and looked like this: 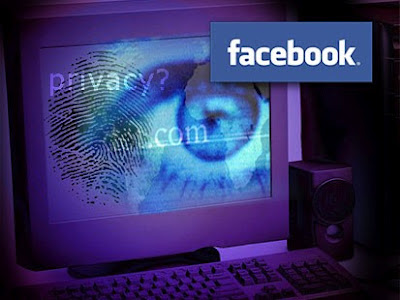 Qualman (email, twitter, bio)  is the author of  Socialnomics: How Social Media Transforms the Way
We Live and Do Business (Wiley, 2010, 320 pp). He used the graphic (no attribution) to illustrate his blog post http://www.socialnomics.net/2010/05/20/facebook-privacy-issues-the-irony/ about his concept that "Word of Mouth goes World of Mouth."

He wrote that he believed that


Facebook is smart enough to restore...comfort [about privacy] and restore it soon.If they don’t, it could be their eventual demise.After all, perception is reality, and their own tool can definitely hyper-accelerate perception into reality. Ironic, isn’t it?

Wonder what Qualman thinks now? If I found out, I'll let you know. I'm sharing this with him to let him know I want to use his art work.
Posted by Beth Wellington at 11:02 PM