The Town and the Mosaic 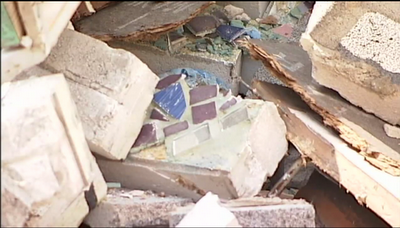 On the evening of June 16, I walked over to the site Steve Hill's planned Brownstone project which I wrote about yesterday and looked over the orange snow fencing at a pile of rubble: jagged sections of block studded with colored tiles and  mirrors, topped by a door painted to blend in with what was once the mosaic created by members of the Boys and Girls's Club which  met at the Blacksburg Middle School.

Kirk talked mostly about her efforts to find volunteers and to find a grant or donor to contribute the $20,000 it would have taken to preserve the wall on which the mosaic was mounted.  She told me that Phyllis Albritton, one of the founders of the Club had worked, alongside three others to try and help.  The Town had opted to take pictures of the mosaic and a t-shirt vendor was about to put up a site where folks could select a portion to be printed on a custom t-shirt.  A portion of the proceeds would go to help fund Untagging the Town.

Kirk told me he had filed a  Memorandum for the Record about the mosaic with the Town on June 19.  She had mailed it to Gangloff  and was glad to email me with a copy, which I've made available at this link to my google docs.

When I received the document, I was surprised to learn that there was a much more economical option than preserving the wall intact, which, given the short time frame Steve Hill allowed, seemed to me to be more feasible. It also would have served to do more than to "memorialize" the wall.

Kirk wrote in her report:


A possibility does exist to save pieces.  Contractor Paul Shively anticipates a July 16th demolition start date.  If the public wants access to the pieces, he recommends a roll-off and he will scoop that section into the container and it could be hauled off.

I've sent an email with a copy of the Memorandum to both Albritton and to Susan Mattingly (email), the Executive Director of Blacksburg's  Lyric Theatre, whose offices host the Community Arts Information Office (CAIO). I asked both women whether they had received a copy of the report.

In Mattingly's case I added,

My thought when I read the memorandum today--especially after attending the TED talk at the Lyric--is what a cool project it would have been for Minds Wide Open:  to have numbered the pieces and the corresponding photograph and then salvaged the pieces.

The Lyric Council had partnered with Center for the Arts at Virginia Tech, the Blacksburg Regional Art Association, and Virginia Tech’s Student Centers and Activities to "Color College Avenue" on May 19.  The project

welcome[d] children of all ages to create a painting on the surface of College Avenue between Main Street and Draper Road...[to] decorate the street until construction on the College Avenue Promenade begins.

The Council also sponsored the TED talk on Being the Change I wrote about on July 12.

I copied my email to Mattingly to Town Council member John Bush (email) and to Lyric Council member Brennan Shepard (email) , both of whom had been part of program following the TED talk.

I'll let you know what I hear back.