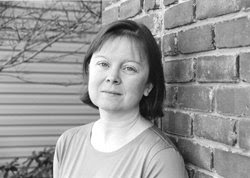 The picture above is of Diane Gilliam Fisher, whose Kettle Bottom (Perugia Press, Florence Mass, 2004, 88 pp.) is an extraordinary evocation of the West Virginia mine wars of 1920-1921. The book starts with an epigram from the poem "Gauley Bridge" in Muriel Rukeyser's 1938 US 1: The Book of the Dead , which recounts the Hawk's Nest incident, the deaths of over a thousand workers, mostly black, from black lung after tunneling under Gauley Mountain in order to divert the New River for a Union Carbide hydro-electric plant.

What do you want--a cliff over the city?
A foreland, sloped to sea and overgrown with roses?
These people live here.

There's still a transcript of the 1936 House Subcommittee on Labor's "Investigation Relating to Health Conditions of Workers Employed in the Construction and Maintenance of Public Utilities," along with explication of poems at Modern American Poetry, the "Online Journal and Multimedia Companion to Anthology of Modern American Poetry

(Oxford University Press, 2000) edited by Cary Nelson. Fisher, of course, published too late to make the cut, but I can't help thinking these poems are so good she should have, if the book had been published earlier.

Kettle bottom, as Fisher explains, is a “petrified tree trunk / buried in the mountain, two, three hundred / pounds” that “Drops through the mine roof” and “kills a man / just like that.” Her book is divided into three sections.

This poem leads off the first section, "Summer~Fall."

Explosion at Winco No 9

Delsey Slayer knowed Tom Junior by his toes,which his steel-toed boots had kept the fire off of.
Betty Rose seen a piece of Willie's ear, the little
notched part where a hound had bit him
when he was a young'un, playing at eating its food. It is true that the men that goes in, but it is us
that carries the mine inside. It is us that listens
to what all they are scared of and takes
the weight of it from them, like handing off
a sack of meal. Us that learns by heart
birthmarks, scars, bends of fingers,
how the teeth set crooked or straight.
Us that picks up the pieces.

I didn't have
nothing to patch with but my old blue dress,
and Ted didn't want floweredy goods
on his shirt. I told him, It's just under your arm,
Ted, it ain't going to show.
They brung out bodies,
you couldn't tell. I seen a piece of my old blue dress
one one of them bodies, blacked with smoke,
but I could tell it was my patch, up under the arm.
When the man writing in the big black book
come around asking about identifying marks
I said, blue dress. I told him Maude Stanley, 23.

Here is part of a ten-page long poem that comprises the second section.

I must have slept for I dreamed the fire boss
torching the gas up under the roof
as he come towards me down the hall.
Then I seen he had wings
and that torch was the flaming sword
turning every way at the gate
of the Garden, and then I looked again
and I see his face all black
and grinning--I think it was a dream.
I think I'm awake. Oh Christ.
Christ, don't let me be in hell
Oh, Jesus. Jesus, Jesus.
....
So I guess I'll die. I'm dying right now
and I ain't laughing neither. Twenty
years old and crying into my shirt.
I'm glad Gertie can't see me.
But when he seen God
was really going to make him die, even Jesus cried
and tried to change his mind....
Out of the dark of the drift mouth
they'll be men still coming out. In twos
and threes, holding each other up, dragging
brothers and fathers between them. Only
the carbide lamps show, no faces. I am part
of the dark the lights bob through in little clusters,
wavery constellations that fade into ordinary
men in the daylight. I am far under
the roots of the old chestnut, hid in the
raven light, where the rock
of ages has cleft.

This poem is from the third and final section Summer~Winter.
Samson

Pillars is the walls of clay you leave
between rooms while you working
the rooms--Boss had me explain it
to the Big Boss come down from Boston
on the train to lay eyes on things.
Boss didn't call me by my name,
Bragged how big I is, how strong
a colored boy get when he shovel and haul.
Didn't ask me how my eye got gone--
coal shot out when I was pillar drawing.
Didn't ask my name, neither one.

just holler, Come on over here, son.
I played along, Yessir, I told them,
them pillars is coal, they can get sold.
We come back in when the room is all mined
and pull them down, we don't leave nothing
behind, I've knowed three men died that way,
nothing left of them but their names--

roof don't hold too long without no walls.
Bosses begin to edge back towards the hall.
I stood in their way. With my right hand
I pressed one pillar, the other with my left.
I explained--to the mountains we all the same.
I pressed harder, and told them my name.

Fisher lives in Brimfield, Ohio with her husband and two daughters. She was born and grew up in Columbus Ohio. Her parents were part of the Appalachian outmigration from West Virginia's Mingo County and Kentucky's Johnson County. She has a PhD in Romance Languages and Literature from Ohio State University and an MFA from Warren Wilson.

Last night 's New River Old Time's square dance in Blacksburg featured caller Beth Molaro and the Wild Turkeys (Cindy Cook on fiddle0 Greg Galbreath on banjo/guitar, Jim Barnhill on guitar, and Frances West on bass and autoharp). Stayed with nathan and went over to the Free Press and on to lunch at Nerv (that IS the spelling) with my sister Carol, her friend Diana, both of whom teach at Auburn Elementary and their former student teacher T-Ryan (his really, truly given name.)
Posted by Beth Wellington at 3:43 PM
Diane Gilliam Fisher
2006-03-05T15:43:00-05:00
Beth Wellington
Comments