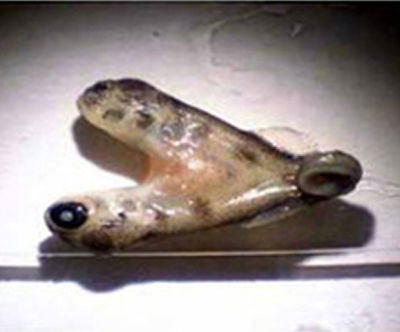 The above photo accompanied the February 29, 2012 Discovery News article "Two-headed Trout Raises Eyebrows in Idaho" by freelance science writer Sarah Simpson (email, bio). This post was first published on July 10, 2012 at 8:00 pm.  It was last updated on July 11 at 5:12 pm to include a caption for this picture.

The above two-headed baby trout  was caught born of wild fish caught in a Idaho stream polluted by Simplot's selenium.  It originated not in the imagination of Matt Groenig nor the writers of the World Weekly News, but in the company's own report and reported on by venues such as the Discovery Channel.

You may have caught Jon Stewart's  Daily Show segment with Erin Brockovich on how Simplot still had the audacity to claim those selenium levels are safe.  Lisa Evans of EarthJustice explained the backstory in February:


J.R. Simplot Company, owner of several phosphate mines in Idaho, is asking federal and state regulators to relax water quality standards and permit more selenium in Idaho streams than the law currently allows.  The reason: Simplot, one of the largest privately held companies in the world, doesn’t want to clean up creeks polluted with selenium from its mining operations in the Caribou National Forest.  As part of Simplot’s campaign to avoid expensive Superfund cleanups, the company conducted a study of the fish impacted by selenium near its Smoky Canyon Mine to demonstrate that a little more selenium is not such a bad thing.

There is also selenium in fly ash, what's left when companies such as AEP burn coal to fire electric plants to produce electricity.  Besides climate change from carbon emissions and destruction of mountains from mtr mining, and a few other curses, it's a good reason to argue for a transition for Appalachia to the future through efficiency and renewables.

In the next county down Rt. 460 to my west, the Concerned Citizens of Giles County (CCGC) finally have a court date July 13 on a writ about AEP's Cumberland Park Project fly ash dump in the floodplain of the New River brought to us local politician Howard Spencer under the aegis of the Giles County Partnership for Excellence in a fiction about "beneficial use."

Because of industry opposition, the EPA has not yet regulated fly ash.  The CCGC has been struggling for years for a way to hold the Partnership responsible and remove the dump.  Tim  Thornton was the environmental reporter for The Roanoke Times and  wrote a series of stories that documented the process spanning the period from until he left the paper on March 31, 2009. I've provided links to the stories at the end of this post.

This week, the member's continued efforts will take the form of a hearing on July 13 on a writ to produce a copy of the garage lease agreement between Glen Lyn and the Partnership.CCGC past president Vernon Kelley (Judy Brown has taken over the reins) wrote an email to Thornton and me last night captioned, "Interesting turn on our writ case -- this could end up bigger than we thought."


Our court case (writ) has taken an interesting (and maybe historical) turn.  Chidister is going to try to have the case dismissed because of a statute of limitations.  Chidister is claiming that since FIOA law is not specific that the case should be governed by the two year rule.

If he is successful then FOIA laws will be gutted.  All a government/government rep would have to do is deny the existence of a document(s) for two years and a day and there would be no penalty and the requester would never see the document.  This is exactly what Howard/the Mayor and the Town of Glen Lyn did.  They claimed there was no written lease agreement and we had no way of knowing.  As you are aware Howard/Partnership does millions of dollars of business without written contracts (Hammering in the Hills, Cumberland Park, Glen Harmon/Campground) -- we certainly couldn't go to court and ask the Judge to force Howard to release documents that we were told didn't exist and we couldn't prove that they did exist.

For years, I have been wondered what the hook was for the story of the Cumberland Park coal ash dump,  if it were to move beyond local reporting.  The recent developments in EPA's attempts  to regulate coal ash, following the TVA spill have made it timely, but the story was complicated  to explain.  Even though there was another ash dump in Virginia built into a golf course suffering from poisoned wells.  Even with Dominion and then ODEC, bucking the national trend to NOT build new coal plants given the growing evidence that regulation would be necessary and add to the cost of burning coal.

The FOIA implications maybe just be that hook. CCGC is meeting as I write to prepare for Court.  And as Kelley wrote Thornton and I,


I think other news outlets are going to be contacted regarding this motion because it could have serious ramifications....