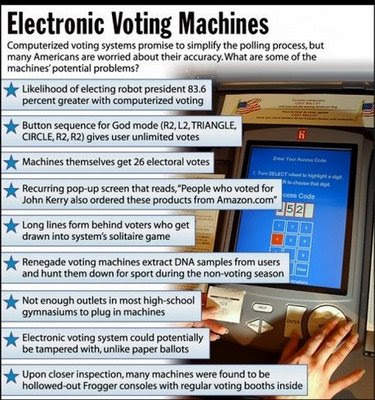 The above illustration is from The May 19 2004 Onion . The Help America Vote Act of 2002 was supposed to clear up everything that plagued the 2000 presidential election. In particular, it provided funds for new voting machines to eliminate the punch card hanging chad problem. It didn't fix things in time for the 2004 federal elections and it sure didn't fix things fix things in time for the 2005 Virginia state races. The final vote in the Virginia Attorney General's race, certified December 21 by the three-judge panel of the Richmond Circuit Court, highlighted how HAVA probably has exacerbated problems by promoting a move to touchscreen voting machines, which to date have no paper trail.

Republican Bob McDonnell ended up with just 360 more votes than Democrat Creigh Deeds. The tally was 970,981 for McDonnell and 970,621 for Deeds. The State Board of Elections had certified Republican McDonnell the winner of the Nov. 8 election by a margin of 0.0166 of a percentage point. Virginia law allows a court-supervised recount when results fall within 1 percentage point, with taxpayers picking up the tab for results within one-half of 1 percentage point. Both campaigns had to pay their lawyers and others helping with the recount.

The "recount" should raise questions for the Virginia Joint Subcommittee Studying the Cetification, Deployment and Performance of Election Equipment when it meets January 5. Individual ballots on touch-screen and lever machines could not be recounted, only checked against printouts. As Duke computer graduate student Justin Moore critiqued the verification of these results by officials in a comment in Charlottesville pundit Rick Sincere's blog,

There's a big difference between "secure and unchanging" and "lacking contradictory or confirmational evidence". I could claim that I untied and re-tied my shoes four times while alone in my office today, but without any
witnesses or detailed examination of my shoes or shoelaces, you have to take me
on my word.

Or did you just re-copy the numbers you got the first time around onto a
piece of paper the second time around? Do the numbers match only because you
wrote the same number down twice?

Moore has a running debate with Sincere, who has extolled the touch screen machines. On November 21, Moore had filed an analysis of with the Virginia Joint Subcommittee.<

It is likely that, due to subtle problems in paperless machines, there were 12,000 votes for Lieutenant Governor missing from paperless systems statewide, and over 9,000 votes for Attorney General missing from paperless systems; this is over 25x the margin of victory for Attorney General. This is not to say that the result would have been different, merely that votes that -- statistically speaking -- should have been there just aren't there.

The Association for Computer Marchinery's member poll on paperless evoting problems also prompted that group to file a letter with the joint subcommittee.Virginia Verified Voting also has a list of recommendations filed that date, calling for a voter verified permanent record of every ballot cast.

Optical scan machines often miss votes that are indicated by light pencil or pen marks, or whose marks are partly outside the lines. Deed had asked to rerun more than 500,000 optical scan ballots. His attorney, Joseph Kearfott, argued that thousands of votes would not be recounted if all the ballots were not scanned again. In court papers, During a rescan of ballots with not vote for Attorney General, the machine might pick up votes that it failed to recognize the first time, Kearfott said. Kearfott also argued that some votes were not counted at all. He presented the judges with an affidavit from a member of the Gloucester County Electoral Board, who said printouts from the county's voting machines indicated 78 ballots were never counted.

Here there is a meaningful chance that a full recount ... could result in the difference in the election. You owe it to the candidates and to the state of Virginia.

Jean Jensen, secretary of the elections board, said under Deeds' proposal, 135,000 ballots would need to be examined by hand, because of technical limitations in some of the voting machines.

McDonnell's attorney, Bill Hurd, argued that could lead to human error and would

would create an awful, awful mess.

December 10, Chief Judge Theodore J. Markow, Judge Larry Kirksey and Judge Wilford Taylor rejected Kearfott's argument, finding he had failed to provide enough proof that there were substantial missed or miscounted votes that likely would alter the result of the election. While Deeds had requested recounds in 156 precincts, the court only ordered more rigorous hand counts of 7,915 ballots from nine precincts in Gloucester County and one in Lynchburg. Machines did not process 79 votes in Gloucester. Machines could not tabulate 244 ballots in Lynchburg because voters had used the wrong kind of pen. A few thousand old-fashioned paper ballots statewide also had to be recounted manually, and punch-card ballots in one Virginia Beach precinct were rerun through a tabulator because a printout of the original results could not be read.

This ruling and this order just leaves more questions than answers, and
leaves many important questions unanswered .

One wonders what happened to the Supreme Court doctrine established in Bush v. Gore - that statewide recounts should be conducted with uniform procedures and rules in every voting jurisdiction.

But the deeper question is how to secure a fair election in the face of paperless evoting. On February 2, 2005, Representative Rush D. Holt (D-NJ) introduced H. R. 550 to amend the Help America Vote Act of 2002 to require a voter-verified permanent paper record or hard copy under title III of such Act.

Anything of value should be auditable,” said Holt. “Votes are valuable, and each voter should have the knowledge—and the confidence—that his or her vote was recorded and counted as intended. Passage of this bill will be a big step in restoring that confidence, which is the very foundation of our democratic republic.

There are 159 co-sponsors. Representive Boucher added his name April 5. the measure remains stalled in the House Committee on Administration. Holt's webpage on verified voting is here.

What action can you take to secure fairer elections? You can sign Holt's petition in support of H.R. 550 You can email the members of the Joint Subcommittee with your concerns care of Mary Spain. You can email Virginia Verified Voting for information on how to get better voting equipment in Virginia.

In other legal news, in the the "stranger than fiction category" the most read story on Yahoo today is about how the Paul Clement, the Sollicitor General for the Bush Administration, filed an amicus brief in the Anna Niclole Smith Case before the Supreme Court. It must have been a slow news day, because Clement filed his request November 21 and his motion to participate in oral arguments December 1, as the docket for the case shows. It seems the Bush Administration wants to protect the federal role in probate issues. Another interesting footnote to the gang that wanted to shrink federal government.