Ethelbert Miller's in his Fifth Inning 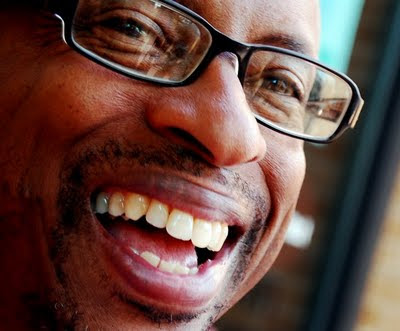 Photo of Miller by Shyree Mezick used by permission. Ethelbert Miller (blog, website) gave a reading at Volume II Bookstore September 10th, 2009, after which I interviewed him via email over a couple of  days from 9/30 through 10/1 and wrote this draft.. A version of the interview was slated to appear in 16 Blocks, but never made it, so once I confirmed that I published it today. Ethelbert's poem here, "Hitless and Crying at the Plate" is from April 2009 collection from Curbstone, On Saturdays, I Santana With You. He chairs the board the Institute for Policy Studies and directs the African American Resource Center at Howard University. He has authored of nine books of poetry and two memoirs and edited four anthologies.

Do you see yourself as a "cultural worker." Is being a poet and memoirist part of this?

I haven't used the term "cultural worker" to define myself since the early 1980s. Back then I was doing work that placed me in touch with people from Nicaragua, El Salvador and Chile. I saw my poetry and activism being responsible for connecting communities with different cultures and interests. One person I admire, who used this term was singer Bernice Reagon, one of the Freedom Singers and the founder of Sweet Honey In The Rock. When I think of Paul Robeson, I think of the definitive cultural worker. Today I'm more comfortable with the label "Literary Activist." I keep the door open for the words poet and memoirist. I define being a literary activist as working with publishing, promotion and preservation.


So, "cultural workers" connect communities with different cultures and interests...you don't use the term to describe youself anymore, but when you were here in Blacksburg you spoke of going to the Middle East?

I've been fortunate to travel to a number of countries in the Middle East. I have visited Iraq, Saudi Arabia, Bahrain, Yemen and Israel.

Earlier this year I was invited to Abu Dhabi for the release of a collection of my poems (At Night We Are All Black Poets) that had been translated into Arabic. I think it's important to visit Arab nations in order to gain a better understanding of Islam. The major adjustment I've had to make is around issues of gender. I'm concern with the status of women in the Muslim world. I feel that the segregation of people by sex is no different than keeping people apart by race. I can't see a society or nation reaching its full potential unless everyone is treated equally. I'm respectful of cultural differences but I think there are limitations to the tolerance of oppression in its various forms. Lately I've been looking at societies in which "joy" is openly expressed. I feel life is to be celebrated. What type of God would prevent one from dancing?

As a literary activist you're involved with "promotion and preservation" Would you tell us a little about your work on Langston Hughes?

A couple of years ago I was working on a project coordinated by Poets House (in New York). They sent me to a number of public libraries around the country to give lectures on Langston Hughes. It was fun reading Langston's work and sharing it with adults and children. I've always enjoyed his work since it is so accessible to the reader. His book, The Big Sea is a personal favorite. I like the fact that Langston Hughes was a man of letters and he traveled around the world. I've been fortunate to visit some of the same places he went to. It's unfortunate that much of his work represented in American poetry anthologies are from his early years as a writer.The radical Hughes of the 1930s is often not discussed in classrooms. When he was alive he was censored not for his racial work but for his poems that dealt with religion. I think it's important to acknowledge the full career of Langston Hughes. His children books, the work that he translated and the plays he presented on stage, all provide a different perspective of a man who was loved and should be viewed as a literary genius. Hughes should be viewed not just as a black writer but also as an experimental voice in American literature. One can see this in a book like Ask Your Momma.

When you read in Blacksburg you included work by other poets. What's your philosophy behind that...

I read poems by Naomi Shihab Nye and Liam Rector [and] Pablo Neruda. I like to underscore my appreciation for poetry by reading the work of other poets. I also like to show how what I'm attempting to do complements what is already in the canon. I read Liam's work because I want to keep his memory alive. Hopefully good poetry can defy death. There are so many voices the average reader and lover of poetry need to know about. I try to turn my readings into forums of discovery.

When I listened to you read the first anecdote about your father in your first memoir Fathering Words, I was struck by how the cadence still was something like a poem. How is the process of writing memoir different than writing poems.

I define myself first as a poet. I hope that when I sit down to write prose or creative non-fiction I don't leave something behind. I want to infuse the poetic sensibility into everything I do. While writing [the first memoir] Fathering Words, I would read passages aloud for the sound and the taste of it. I wanted to produce a book that people would read and underline a passage, a sentence or two. I wanted the reader to return to my memoir the way a person returns to a poem. The second and third reading becoming a sweater or shawl to keep a person warm.

I didn't do any major revision with Fathering Words. I gave the book to my editor at St. Martin's Press and it was accepted. I don't know if I could have gone back and revised my memoir. I don't think I had the discipline to do that back then. The writing process was much quicker for me. I wrote my first memoir using a computer. Many of my ideas for poems are still written down on paper. Writing poetry is a much slower process for me.


The second memoir, The Fifth Inning often uses baseball as a metaphor.  Can you talk about your relationship with "home plate?"

Baseball is a game that begins and ends at home. You bat. You try to touch all the bases and return home. In The 5th Inning I take the reader into the home I tried to create for my wife and family. I think I failed to provide the type of place my wife would have liked. That's why early in the memoir I describe all the apartments we lived in. Notice at the end of the book, I'm getting ready to leave VCCA and my wife Denise is coming to take me home. It was important to have this type of ending. Memoir is also storytelling. I needed to present the reader with a degree of light after writing what many view as a dark or sad book. I'm reminded of what my friend Julia Galbus mentioned (and I included in the book) about many baseball games ending because of darkness and perhaps a storm. I'm aware of that but I needed to be positive in terms of the importance of home, especially in a spiritual sense.


What did you want to leave with your readers? What did you discover in the process of writing the book.

I wanted to leave the reader aware of his or her own shortcomings. I wanted to make someone who is forty or in their fifties aware of how quickly everything can end. I also wanted people to hit and pitch better in their own lives. Even when I compiled an honest list of the many things I can't do, maybe a reader might stop and do the same thing. I think I've also given the reader a short book. A book that physically can fit into a bag or case. A bullpen book. Something to read as the game of life is played around you. Turn a page and never known if it's your turn. Somewhere a manager beckons to the bullpen - time for you to get ready. Are you ready?


Hitless And Crying At The Plate by Ethelbert Miller (For Reetika)

Are you crying? There's no crying in baseball. -Manager Jimmy Dugan to outfielder Evelyn Gardner
in A League of Their Own. 1992.

By the way, you should know that every time
I wear a baseball cap while working, I
Ask John, Guess who I am?
He says, I don't know- who?
I say Ethelbert: - A letter from Reetika Vazirani, July 3, 1991.

The year Sammy Sosa
Corked his bat is the year
You took your life. We all felt cheated
You like our hero standing
In the batters box alone.

Why do poets
Try to change the rules of the game?
Why is death America's pastime?

Sometimes I fear the blues
Is a curveball breaking
Near my head.

On Saturdays, I Santana With You, Curbstone, 2009.
Posted by Beth Wellington at 5:30 PM