Borne on the Fourth of July: Only Some Can Celebrate After the Derecho 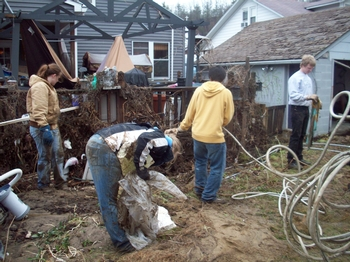 Photo from a slide show of Iowa State students volunteering through SALS in 2010. This piece was posted on July 4, 2012 at 1:23 p.m.  The most recent update was on July 5 at 12:25 a.m.  I will be updating as I receive more information and as I get time to return to the topic of my original post.

So there I was early this morning starting to write about activist Brian Willson's birthday and Andy Griffith, I was researching the state of civil liberties on the Independence Day and planning to attend the parade and fireworks in the small town of  Shawsville, Virginia.

But at 9:00 a.m., it seemed as if things had improved since when I wrote yesterday about Fayette County, WV. The National Guard (or what I took to be the National Guard--the word used was "military") was supposed to be, thankfully, on site at the Oak Hill School. If FEMA persisted in its perimeter plan, Oak Hill School still needed bottled water, food, batteries and lanterns.

Then I learned across the river they need everything, according to Bob Kincaid. Where IS the National Guard for those folks? Presbyterian minister and OVEC Organizer Robin Blakeman suggests everyone who does have phones can call and ask when the remaining folks will be helped. I've included phone numbers and email contacts below.

The report from Bob Kincaid

At 5:50 p.m. Bob explained why things remain terrible in his part of Fayette County:


We're not dying or anything, but with everyone I've talked to, there's a real sense of "W-T-F!"

If it's true that SALS begged for centrally located help and were rebuffed, someone needs to lose his/her job. Folks could get to Oak Hill a darned sight easier than other locations. I know of one person who drove a half hour trying to find gasoline in Smithers, on the Kanawha County line. That's ten miles down Gauley Mountain and another ten yet.

Using the school would've made perfect sense. Among other things, they have the existing infrastructure to deal with large crowds. Please pardon my paranoia, but I can imagine a scenario where folks like Earl Ray wouldn't have wanted SALS to have that kind of publicity. If he could've set up a relief station on an MTR site, my money says he would have. And you can quote me on that, for sure.

John David at SALS wrote at 6:00 p.m and confirmed the National Guard help


The National Guard had a food trailer set up at 9 am today at the SALS Historic Oak Hill School. The free picnic is in Fayetteville now. The Guard will move the trailer down to Page/Kincaid/Bears Fork on Thursday, we expect.

Contacts to ask when the remaining folks will be helped

The volunteers were actually scheduled previously as part of our workcamp/home repair program. They consist of faith-based high school youth from throughout the U.S. We have 800 coming, 400 this weekend for the Plateau area of Fayette County (residing at the The SALS Historic Oak Hill School) and in two weeks another 400 coming for the Upper Kanawha Valley (residing at Riverside High School). Together, they were scheduled to work on about 100 homes of low income families.
For the group coming this weekend, we might need to change the plan modestly. If the homes of the selected families have tree damage or blocked access, we will focus on that matter first. In the midst of the chaos this week, we had SALS staff pre-delivering paint and building supplies to families….so we will dispatch work crews at 8:30 am on Monday morning. For food, we are bringing in to The SALS Historic Oak Hill School two self-powered refrigerated semi trailers.
Vickie Smith from SALS will be attending the 9 am Fayette County Emergency meeting at the 911 Center this morning, July 4th. She can be reached at 304.640.3792. The county emergency coordinator, who would likely be the best person to contact for a comprehensive perspective, is Teresa White at cell 304.673.9331 or 304.574.3885.
I am sharing this email with Matt Wender, President of the Fayette County Commission, and Senator Bill Laird….both of whom have worked extremely hard on this matter and may wish to offer additional clarity and perspectives if they have internet service.

You can share any of this you like if you feel it may be of interest. If folks wish to help, bottled water and food would be very helpful. Since power may be spotty, particularly in rural areas, batteries and lanterns for families who we visit during the coming week would be useful. The physical address for the SALS Historic Oak Hill School is 140 School Street, Oak Hill, WV…..our mailing address is SALS, P.O.Box 127, Kincaid, WV 25119.


If power is not on at The Historic Oak Hill School by Wednesday, July 4th, a military unit will set up an emergency kitchen there at 9 am on July 4th.

Generators have arrived at several PSDs to pump water. Our Page-Kincaid PSD is pumping as this is being written and we hope distribution can resume on July 4th on a “boil it” basis. We serve 4.5% of the county’s population. Boiling water, of course, without electric is tough in areas such as Beards Fork that do not have natural gas service (even though there are nearly natural gas wells!). SALS operate a shelter in Beards Fork that runs on generators hooked to propane…and stoves powered the same. The pantry there was also opened.

Electric is trickling on. Oak Hill has scattered service this evening, as does some areas in the Valley. Phone service is cell only ….which need to be re-charged.

Bottled water has arrived by truck in some locations and distribution is underway. The promised National Guard folks to do house calls never showed.

People have come together to host a county picnic for hungry folks with free food and drinks on July 4th, 5 pm, Fayette County Courthouse lawn.

Posted by Beth Wellington at 1:23 PM