And the Wall Comes Tumbling Down 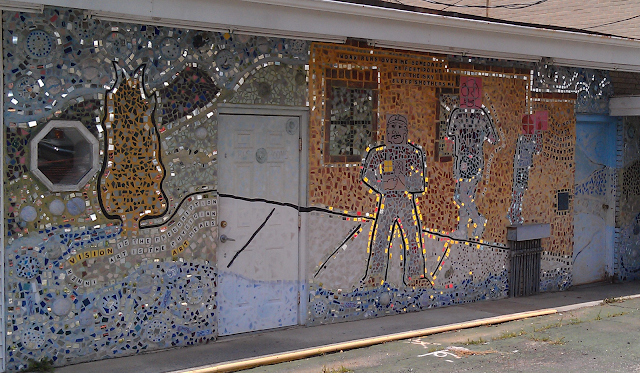 This a cropped version of a photo provided to me by Kim Kirk (email), Neighborhood Services Coordinator at the Town of Blacksburg. More photos of the mosaic are here. I first published this post  on July 16, 2012 at 8:00 p.m.  I updated it on July 17 at 7:40 p.m. to add the photo  and then again to edit it for style and additional information about the Boys and Girls Club on July 18 at 6:52 p.m. It was last updated on July 19 at 1:14 p.m. to add the picture from Twitter by Chris Jenkins of WDBJ7 found in the body of the post.

Today, a piece of Blackburg history vanished into a heap of rubble

Gone is the mosaic built  by Boys and Girls Club members who met at Blacksburg Middle School.  Back in 2001, they constructed their artwork on the wall of the Food Time gas station and convenience store on Main Street.  It was charming and reminded me of something constructed by outsider artist Howard Finster.  According to a story in the Radford Journal, the members celebrated November 28, 2001 with a reception at Gillies.

The theme for the mosaic was outlined within it in block letters in various places, as you can see if you click on the photo above to see it at full size :

Inner vision is the prescription
Art is the physician
Art heals.


If we're not
we should be

Gone, too, is the Blacksburg Middle School Boys and Girls Club which built the mosaic

Local school board member Phyllis Albritton was one of the founders of the Boys and Girls Clubs of the New River Valley.  The Blacksburg Club closed in 2009.  There are still clubs in Montgomery County at Shawsville and Christiansburg Middle Schools, which, since at least 2006, have operated as part of  Boys and Girls Clubs of Southwest Virginia (BGCSWV).

I found out about the fate of the mosaic on twitter

Chris Jenkins of WDBJ7  posted a series of pictures there today.  This is the last one in a series of three that he posted at 1:07 p.m.: 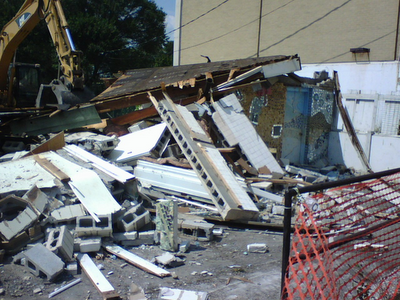 When I looked up the mosaic online, I realized that I missed the story Roanoke Times reporter Mike Gangloff published on July 1, in the now sadly diminished New River Valley supplement, "The Burgs," which replaced "The Current."

The reason for the demolition: The Brownstone

It turns out that the demolition is part of retired commodities trader Steve Hill's plan for yet another parking-commercial-residential mixed-use structure in downtown Blacksburg dubbed The Brownstone. If I had read Gangloff's story, I would have know about the rush to clear the land for the project on the block between Clay and Washington Streets. I would have known about the planned demolition of athe mosaic.  Hill told Gangloff he has decided to incorporated the former Annie Kay’s health food store because restrictions attached to its historic status  meant demolition would take an unacceptably long time.  No such historic status attached to the mosaic. Hill said he didn't MIND if the mosaic were preserved,  just so long as it was gone by the time of demolition in two weeks time.

I had seen Hill's sign in front of the  old Annie Kay's health food store on South Main for a new project.   I confess, I wondered at the time where the Floyd County native-- who returned to the New River Valley in 2001--had traded commodities.  Had he ever been to Brooklyn or the Upper West Side?  Or even to Phillippi WV to see the Barbour County Court House? Or did he just come up for a catchy name for what is just the brown brick of the old Annie Kay's, owned at one time by Clark Webb.

Clark Webb didn't own the building. It was in the hands of  the family who owned Wade's.  Besides Annie Kay's downstairs, it housed The New River Free Press and the Coalition for Justice upstairs.  And then the owners told the Free Press's treasurer that their the accountant  said they weren't renting their space at market value. Annie Kay's eventually moved further down Main Street, Even before then, the Coalition closed its offices and the Free Press moved temporarily to Cambria.  The building stood vacant.  Which seems like it would be way below market value.

The Free Press finally moved back to Blacksburg when  Chris Kappas--the one time owner of Souvaki's-- rented an apartment above the Cellar to the paper at an affordable price until it closed in 2004.  It wasn't that Kappas agreed with the paper's politics, he told us, it was that he believed in free speech.  He even went so far as to regularly buy ads and to sign on as an underwriter to special supplements such as Appalachian Voices, our literary magazine.  It was Kappas's kindness to our endeavor that has led me to patronize Souvaki's, even after he sold it, despite the fact that I rarely, otherwise, eat meat.

Why wasn't the mosaic saved?

I didn't look into The Brownstone project.  Wondering about its name is about as far as I went.  While I was writing this and looking for news of Chris Kappas, I found this story which seemed to indicated that while Blacksburg proclaims its desire to be an art town,  more coverage is generated about how people cared  about the elimination of a dying tree.  I, too, love trees, and am sad to see one go.  But every effort seems to have been made to save the tree on College Avenue.

I'm wondering if the same thing could be said about the mosaic.  Tomorrow, I'll call Kim Kirk, with UnTagging the Town, a Blacksburg art initiative, which determined that the mosaic could be preserved with sufficient resources and volunteers.
Posted by Beth Wellington at 8:00 PM