Greenbrier beyond The Greenbrier: Jim Justice and the "Just Us" League 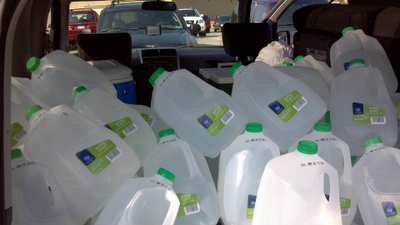 Photo by Danny Chiotos of the Keeper of the Mountain Foundation, posted to facebook shows the back of Gus Sodaro's Honda Element. This post was first published on July 6, 2012 at 1:31 p.m. I made the last revision on on July 7 at 10:29 a.m, in order to include news of additional developments I received throughout the evening of July 5 and to trim the overall outline .

If what you want to read isn't available, as outlined below, please check back. No staff, no funding, power,water still unavailable at home and VT library closes at 8 p.m. due to summer schedule. Until things are square in WV, I don't want any donations to SAMPLER. Paid writing assignments on the topic, however...are another matter.


Anyone with further updates and/or photos and videos should write me, as always, at communitypoweredreporting @ gmail (dot) com. If all you have is a cell phone you can sign up with twitter and send a text message to @bethwellington.

The situation today in West Virginia

The photo above is of Gus Sodaro's Honda Element, the work truck  for his business, Sodaro's Electronics.  He bought gasoline and loaned the truck to help his wife, massage therapist Linda Sodaro, so that she could transport 18 bags of ice and 80 gallons of water which the Keeper of the Mountain Foundation had bought at discount at  the Kroger in Kanawha City for relief in Fayette County.   The Element was so loaded down that Rob Goodwin of Coal River Mountain Watch transferred part of the cargo to his own truck before he and Sodaro set out from Charleston to Montgomery WV this morning.  Another driver met them there and shuttle the water and ice on down to the Southern Appalachian Labor School for distribution in Oak Hill.

The phrase"Just Us" in the title of this post comes from a meme by filmmaker Mari-Lyn Evans. If you were to look at Greenbrier Classic--@GbrClassic--on twitter today, you'd see that the PGA Tour Wives Association --@PGATOURWives--are posting about their post-Derecho help "in the town we call home for the week," Lewisburg, WV.

I've reported about the dust-up after the Red Cross/FEMA sited the Emergency Feeding Station which  serves hard-hit Fayette County, WV in Lewisburg, which is in Greenbrier County.   Eric Eyre of the Charleston Gazette also published a story which included that topic.You might think at least things were fine in Greenbrier County.

Local emergency service providers there are publicly complaining. They say they are not receiving the help they need, that representatives of the Greenbrier Resort refuse to talk with them and will only deal with the National Guard.

Miriam at the Greenbrier County Health Department spoke by phone with Jen Osha of Coal River Mountain Watch and Aurora Lights.  Miriam said she was having respiratory problems and needs oxygen, but still came into work.  Osha writes,


She said that there have had NO on the ground help. The national guard would not give them ice either. The only ice they have gotten has been from WalMart through private donations. She just got off the phone with The Greenbrier who said that they were only working with the National Guard. When she said that she was calling to represent Emergency Services of Greenbrier County, no one would still talk to her.


We are hanging in there, but we do not have enough food, ice, or water. Our big issue is having non perishable food for our rural residents who are still trying to clear trees and can't get out to get a hot meal. Also, we are in urgent need of oxygen! We have a center at the Greenbrier Health Department, but the National Guard brought us old tanks and we can not get the adapters for them. We need people to donate small tanks please.

Al Whitaker is available to talk to the press.  Here is what he told Osha:

We need help from volunteers to man our shelters.  The Red Cross has not helped us at all with volunteers until we got one volunteer last night.  We need volunteers here.

The PGA ladies came to do a photo shoot here at the distribution center.  I told them, '"ere are the places that we need help if you really want to help."  When we made these suggestions, they said they had a schedule they had to keep and needed to get to Lowes.

Gray, who is answering phones today at the Fire Department spoke with Wendy Johnston, a volunteer with the speakers' bureau of Larry Gibson's Keeper of the Mountains Foundation.  Johnston lives  in Athens, WV. and wrote that Gray


and her brothers have been sharing a generator but they still lost all their food. She is in the military and has a regular job but is taking personal leave today so that she can help in her community. She is the communications director for two fire departments.She says that she would be thrilled to talk to... [the media--cell phone number available, upon request]  Sabout cried when I was talking to her...

Power is mixed, rural areas are out. The SALS shelter in Beards Fork still has no food delivery.and limited drinkable waterand no power. Another wind/hail storm went through at noonish and took out power in some areas that had been patched together, like Montgomery, WV.

At the rural water plant in Page-Kincaid, we need more generators to our booster stations that fill up the supply tanks. We cannot distribute water everywhere , even if just for bathing, otherwise.

The National Guard is floating around with a kitchen trailer--a day here, a day there.  W are negotiating with Methodist Relief for a similar unit.


... I went to the 911 meeting this morning and told them that a reality check was needed, especially in the rural areas that make up most of the county. With half of the 45,000 county residents without power and record temperatures forecasted, the demand is high. We are delivering loads of water, ice, and canned food now. While the water is “on”, it is not drinkable and must be boiled and most places do not have natural gas or propane.

There is also a major concern about health. People on life support, like oxygen due to Black Lung, need re-charged equipment or refill on medications. They are reluctant to leave their homes due to theft and live up hollows that many will not go due to downed wires. There is also home damage .

We are preparing the Historical Oak Hill School for 400 volunteers who will arrive Sunday. and will be sending out teams in a couple of days that will take water, food, and battery-powered tools to homes…and collect medical information. We will need funds for fuel, tools, and building materials. At our community center (The Historic Oak Hill School), we now have power but [as I mentioned] the sudden surge blew out our massive freezer, so we are scrambling to raise funds for a replacement.