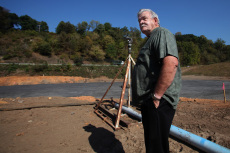 Update on 8/24/2014, with the Roanoke Times sold to Warren Buffet, many links to Tim Thornton's series are broken due to a new content management system; however,  I may have deciphered a way to find the links on http://ww2.roanoke.com/news/nrv/wb/.  I'll test that theory out later, as I've got another deadline.  If you see an *, it's the new link.  I actually found an additional story for 10/20/2007, which the paper had not indexed with Thornton's series.

Update on 9/29/2014, with the EPA set to issue a fly ash rule on December 19, 2014 and the leaks at Possum Point of both lined and unlined coal ash dumps, I went ahead and added more links, but I will need to continue this project later, since Mike Gangloff has a recent article which brings things up to date.

The Cumberland Park project sits in the flood plain in Narrows  between U.S. 460 and the New River.  Howard Spencer and the Giles County Partnership dumped  fly ash there from AEP's
coal-fired electric power plant in Glen Lyn.

Fly ash comes from burning coal.  It contains a variety of toxic materials including selenium, which, among others things, has been responsible for sever birth defects in trout in Idaho.  Not a good thing to dump anywhere, but especially in a scenic river used for both recreation and a source of drinking water further downstream in WV. The Concerned Citizens of Giles County (CCGC) oppose the project and have struggled with a way to get the fly ash moved and disposed of safely.


Besides chairing the Giles County Partnership, Howard Spencer is also  Manager of the Town of Glen Lyn.  At one time he was Chairman of the Giles County Board of Supervisors.  He has also worked for the County Schools.

Because fly ash goes unregulated by either the EPA or the State of Virginia, the CCGC  looked for other options as the plan to start dumping 254,000 cubic yards of coal ash at the Cumberland Park  in April 2008 became public.  In January of that year,  five members asked Circuit Court Colin Gibb  to empanel a grand jury to investigate whether such dumping constituted a public nuisance. Gibb agreed to do so, once coal ash started being dumped.  June 18, Gibb ruled the case closed after receiving the report of the jury foreman that the dumping was not a public nuisance.

Al Capone, a symbol of corruption in Chicago, finally fell on tax charges.  If the CCGC succeeds,  Howard Spencer, may meet the same fate in rural Giles County, Virginia.

Tim Thornton reported extensively on CCG's efforts until he left the Roanoke Times at the end of March 2009.  (I've compiled a list of his articles with links below.)  In April 2012,  Vernon Kelley--CCGC President at that time--wrote Thornton and me that the group was going to court again.

After digging for years into the records for the Partnership using FOIA (the Freedom of Information Act), they were going to file a writ asking  for a copy of the garage lease agreement between the Town of Glen Lyn and the Giles County Partnership

Today, he wrote to explain what led up to the group to file its writ:

The Partnership's by-laws, incorporation papers, their federal tax exempt status, and the Department of Taxation (from 2002-2008  -- the School Board informed the state tax office in 09 that they didn't recognize the Partnership any longer) all clearly state that the Partnership is/was created for the sole benefit of the Giles County Public Schools.

The question the CCGC initially asked was "what is a tax exempt Public School Foundation doing in the toxic fly ash business and how does it benefit our schools?".  Since that time we have discovered that they also flip real estate, rent property, operate a construction program and manage a for profit garage.  The School Board has never approved or monitored these projects nor has any students been involved or trained in these programs.  Furthermore, no profits generated have benefited the schools and no taxes have been paid.

As tax payers we have a legitimate right to ask what do these programs (and the garage) have to do with our schools/students.   Since the answer is obviously NOTHING we also want to know how and why they are still allowed to operate and why they don't pay taxes on their unrelated business profits, rents, and real estate transactions.

CCGC is also pursuing a tax case, which will be the subject of a separate post.

I am in the process of documenting coverage of the Cumberland Park fly ash project to date.
Thornton did a thorough job of explaining the issues and respectfully reporting on the CCGC's concerns, while still maintaining traditional MSM neutrality.  I've reordered the listing of his articleso that it is chronological.

During Thorton's tenure at the paper through March 31, 2009,  there were at least two additional stories by Shawna Morrison, which I have also included below.  The story dated June 18 is indexed with the series; the June 12 story is not.  Since then there have been further stories; however they have not been added to the series by the paper.  (As indicated in my editor's note, I have added those available, when I fixed the broken links due to the new content management system at the paper.  Anything with an asterisk has been added since I originally posted.  If a link under the new content management system disappears, I will add a permalink to a reprint, with the author's permission.

Posted by Beth Wellington at 7:59 PM