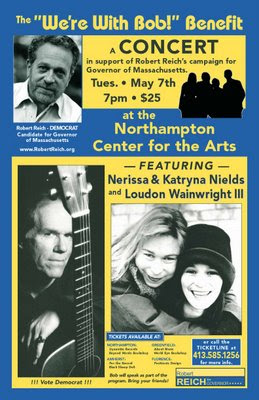 The poster is from Bob Reich's 2002 run for the Democratic nomination for Massachusettes governor by David Caputo of Positronic Design. Reich is a true progressive. The primary results split the votes 185,315 for Reich to 243,039 for Shannon O'Brien. But those were not the only candidates. Warren Tolman, also running as a progressive got 132,157 votes. Tom Birmingham, who had the teacher's endorsement, got 139,703 votes. Steve Grossman got 5,971. O'Brien went on to lose to Mitt Romney and now we have his health care reform. (I'll write about that later but, for starters, see these Boston University scholar's analysis).

Today TomPaine.com published Reich's "Estate Tax Pyramid Scheme" on Tom Frith's promise to bring repeal to a vote. Here's what he has to say:

Those who argue for repeal say the estate tax discourages entrepreneurs. What? Passing on $4 million tax free to your kids is not enough incentive?

Talk about discouraging entrepreneurship. Repeal the estate tax and within a few decades control over America’s productive assets will be in the hands of non-productive Americans who never lifted a finger in their lives except to speed-dial their financial advisors.

In response to an action alert from OMB watch, I wrote Senators Warner and Allen the following email. I hope you'll consider sending your own.

Please vote "no" on estate tax repeal, if it arises this year. We cannot afford to lose a trillion dollars over the first ten years to provide a tax cut that benefits the wealthiest--only one percent of estates pay any estate tax at all.
Warren Buffet has said, "All these people who think that food stamps are debilitating and lead to a cycle of poverty, they're the same ones who go out and want to leave a ton of money to their kids" (Janet Lowe, "Warren Buffett Speaks: Wit and Wisdom from the World's Greatest Investor," John Wiley & Sons, Inc., 1997).

According to a new report from United for a Fair Economy, such people from 18 families worth a total of $185 billion have financed and coordinated the repeal campaign. They posed as small businesses and family farmers, saying their livelihoods would be threatened unless the tax were repealed. In fact it’s hard to find a small business or family farm with an estate valued at more than $4 million.

Most of these 18 families have been wealthy for decades. Only five of them include any of the people who first earned the family fortune. If they succeed in their repeal campaign, they’ll save a total of $71 billion on their tax bills. Should such public relatiions budgets drive domestic policy?

Repeal will increase the disparity in income and further tear apart our national morale. Today’s workers are 24 percent more productive than they were five years ago but their median real earnings have barely budged. Most of the increased productivity has gone to people earning over a million dollars a year--mostly CEOs, investment bankers and hedge fund managers. Average CEO pay back in 1966 was 60 times that of the typical American worker. Now it’s 400 times.

Repeal will squelch entrepeneurism. Thirty years ago, the richest 1 percent owned less than a fifth of America’s wealth. Now, according to a recent report by the Fed Reserve Board, they own more than a third. Repeal the estate tax and within a few decades control over America’s productive assets will be in the hands people who inherit great wealth just because they’re lucky enough to have super-rich parents, but don’t have any particular incentive to be entrepreneurial. As Warren Buffet has also said, "“parents should leave children enough so they can do anything, but not so much that they could do nothing. "Giving heirs a lifetime supply of food stamps just because they came out the right womb" is an "antisocial act."

Repeal removes an important incentive in the the tax code for charitable giving. Charities stand to lose roughly $10 billion a year if the federal estate tax is repealed permanently, according to a study conducted by the Brookings Institution office. The Congressional Budget Office estimated in 2004 that charitable giving would decline by 6 to 12 %.

Please do not repeal this tax and shift its burden to to middle class, working Americans and our children to come.

I ask you to keep fiscal discipline, fairness and compassion in mind.

Thank you for your attention to this important matter.