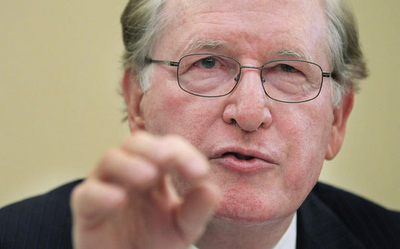 The photo of  Senator Jay Rockefeller (D-WV) is by AP's Manuel Balce Ceneta.  It appeared at Tom Eblen's June 28 blogpost, "A coal supporter talks straight with the industry."

This eloquent guest commentary by Ted Boettner (email, bio), founding director of the West Virginia Center on Budget and Policy  is published with his permission.  It first appeared in the Charleston Gazette on July 11, 2012, under the title, "Ted Boettner: Future Fund sensible solution to 'war on coal'"  For more information, see the website for The Future Fund.

During a speech on the Senate floor, Sen. Jay Rockefeller showed genuine leadership and courage in telling the truth about the real challenges facing coal in West Virginia.

For far too long, the dialogue on coal's future and its impact in West Virginia has been an arena for simplistic and antagonistic politics. This hostile political environment has polarized our state and has led some miners and working families to wrongly believe that if we could just get rid of EPA regulations then the future of coal would be bright in the Mountain State.

As Rockefeller said, West Virginians deserve better. They deserve to have people in power who are not guided by fear but by evidence and the public good.

The reality is that coal is declining in West Virginia and it has more to do with market competition from natural gas and Western coal -- not to mention exhausted coal reserves -- than with any future EPA regulations.

According to the latest projections from the U.S. Energy Information Administration, in 10 years West Virginia will produce only 90 million tons of coal compared with 158 million in 2008. The entire decline is expected to be in the southern coalfields, which will likely see production cut by two-thirds -- from about 100 million tons to about 38 million tons. Even without any concern over greenhouse gases like carbon dioxide, the numbers hardly change according to the Energy Information Administration.

As coal production and employment declines in Southern West Virginia, displaced miners and the communities in which they live will need opportunities to transition into different fields and industries.

If we are going to build a stronger economy for our children and grandchildren, then policy-makers will need to work together and set their differences aside for the future welfare of our state.

One way that we can ensure that coal and other natural resources like natural gas will always play an important role in our state's economy is to create a permanent mineral trust fund or a Future Fund. Such a fund would help our state turn nonrenewable assets into a source of sustainable wealth. It will allow us to meet future challenges by investing in critical physical and human infrastructure that will diversify and expand our state's economy. It is a positive future for coal and natural gas, and one that we can all agree on and count on.

West Virginia could follow the lead of other energy producing states, such as Alaska, Wyoming, Montana, North Dakota, and New Mexico, which dedicate a portion of their severance tax revenue from minerals toward a permanent fund. That way, the fund grows over time and financially bolsters the state's economy through strategic spending. All together, these states have more than $50 billion in assets while paying out about $1 billion each year in returns to their citizens.

With coal production declining in the south and shale gas booming in the north, West Virginia has an opportunity not to repeat the past but move forward to help meet the challenges of the future. Creating a Future Fund is part of the answer. A Future Fund would not only help ensure that future generations of West Virginians benefit from our depleting natural resources, but also ensure that we build a better tomorrow.

However, this will only happen once policy-makers recognize the real challenges facing the future of coal and start working together on real solutions to our state's energy problems. As Sen. Rockefeller said in his speech, if we fail to work together we risk leaving coal miners and their communities in the dust by ignoring the present and denying the future.
Posted by Beth Wellington at 7:45 PM