Peggy Seeger: The First Time Ever 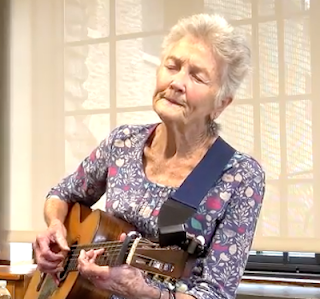 The photo is a screen shot from the video of a 2016 workshop that she did on "Controversial Songs" at SERFA (Southeast Regional Folk Alliance--a regional chapter of the Folk Alliance International) in Black Mountain, NC.

If you want to know what Peggy Seeger is up to, I recommend this video of the 2016 workshop that she did on "Controversial Songs" at SERFA (Southeast Regional Folk Alliance--a regional chapter of the Folk Alliance International) in Black Mountain, NC.   I owe thanks to my friend Helene, who asked for suggestions of songs "about women or by women, which prompted me to go looking for Seeger's "Gonna Be an Engineer," which was the first song that came to mind.

When I was a little girl I wished I was a boy
I tagged along behind the gang and wore my corduroys.
Everybody said I only did it to annoy
But I was gonna be an engineer.

Mamma said, "Why can't you be a lady?
Your duty is to make me the mother of a pearl
Wait until you're older, dear
And maybe you'll be glad that you're a girl.

Dainty as a Dresden statue, gentle as a Jersey cow,
Smooth as silk, gives cream and milk
Learn to coo, learn to moo
That's what you do to be a lady, now.

When I went to school I learned to write and how to read
History, geography and home economy
And typing is a skill that every girl is sure to need
To while away the extra time until the time to breed
And then they had the nerve to ask, what would I like to be?
I says, "I'm gonna be an engineer!"

"No, you only need to learn to be a lady
The duty isn't yours, for to try to run the world
An engineer could never have a baby
Remember, dear, that you're a girl."

She's smart, for a woman.
I wonder how she got that way?
You get no choice, you get no voice
Just stay mum, pretend you're dumb.
That's how you come to be a lady, today.

Well, I started as a typist but I studied on the sly
Working out the day and night so I could qualify
And every time the boss came in, he pinched me on the thigh
Said, "I've never had an engineer!"

"You owe it to the job to be a lady
The duty of the staff is to give the boss a whirl
The wages that you get are crummy, maybe
But it's all you get, 'cause you're a girl."

Then Jimmy came along and we set up a conjugation
We were busy every night with loving recreation
I spent my days at work so he could get an education
And now he's an engineer!

He said: "I know you'll always be a lady
The duty of my darling is to love me all her life
Could an engineer look after or obey me?
Remember, dear, that you're my wife!"

As soon a Jimmy got a job, I studied hard again
Then busy at me turret-lathe a year or two, and then
The morning that the twins were born, Jimmy says to them
"Your mother was an engineer!"

"You owe it to the kids to be a lady
Dainty as a dish-rag, faithful as a chow
Stay at home, you got to mind the baby
Remember you're a mother now!"

Every time I turn around there's something else to do
Cook a meal or mend a sock or sweep a floor or two
Listening to Jimmy Young, it makes me want to spew
I was gonna be an engineer.

I only wish that I could be a lady
I'd do the lovely things that a lady's supposed to do
I wouldn't even mind if only they would pay me
Then I could be a person too.

What price for a woman?
You can buy her for a ring of gold,
To love and obey, without any pay,
You get a cook and a nurse for better or worse
You don't need a purse when a lady is sold.

Oh, but now the times are harder and me Jimmy's got the sack;
I went down to Vicker's, they were glad to have me back.
But I'm a third-class citizen, my wages tell me that
But I'm a first-class engineer!

The boss he says "We pay you as a lady,
You only got the job because I can't afford a man,
With you I keep the profits high as may be,
You're just a cheaper pair of hands."

You got one fault, you're a woman
You're not worth the equal pay.
A bitch or a tart, you're nothing but heart,
Shallow and vain, you've got no brain.

Well, I listened to my mother and I joined a typing pool
Listened to my lover and I put him through his school
If I listen to the boss, I'm just a bloody fool
And an underpaid engineer

Listening to the song, of course,  I spent the rest of the afternoon listening to and watching Seeger.  Of course, Seeger continues to write her own songs, which she described for an upcoming concert as "songs of social change that offer a view of social history." She has just published a memoir, The First Time Ever, in which she writes,


"On stage, I become as the narrow neck of an hourglass, bringing stories and singers from the past to the present; a relay runner hoping that someone will take the song from me and carry it into the future.”

She likens these songs to “human nutrition,” to “a community.” Folks songs are “like a cardiograph: the form being the graph paper and the content the heartbeat.” You can find many of Seeger's songs, including her recent ones at Bandcamp. The latest release is an album of songs she mentions in the memoir.

Peggy Seeger became one of my favorite songwriters, after I stumbled across her in Asheville NC at a lunchtime concert on the history of women in music where she played at least five instruments.

A man came up to her and asked, "How does it feel to have had the most beautiful love song in the English language--or maybe he said "in the world"--written for you." I asked which song (feeling really ignorant, but really wanting to know.) It turned out that Ewan McColl wrote the song made famous by Robert Flack for her: "The First Time Ever I Saw Your Face."  Seeger talks about the song here (and also Leadbelly's "Goodnight Irene") in a December 2017 interview for the BBC.

At the time I met Seeger, I didn't even know who  McColl was and I could never find a copy that he had performed.  I did find Seeger's version, which is much more of a ballad, as different from Flack's version as can be, as different as is Dolly Parton's version of her own song "I Will Always Love You" from Whitney Houston's rendition:


When I met Seeger, I didn't realize that Mike Seeger (whom I knew from concerts and had danced with at the  Blacksburg Square Dance was her brother.  Actually I thought I was dancing with someone who looked just like Mike Seeger until I told him later at the Rockbridge Music Festival that someone there I had danced with looked so much like him and he told me, that's because it was me."  I didn't know that Pete Seeger, whom I had watched on television was her half-brother.

And it didn't matter.  She was a force.  The Telegraph  may write that it is only now with her "sharp-eyed memoir" that we see "her leap from the shadows" after being "defined by the men in her life." Sorry, the paper just wasn't looking.
Posted by Beth Wellington at 7:59 PM
Peggy Seeger: The First Time Ever
2018-03-05T19:59:00-05:00
Beth Wellington
Peggy Seeger|political songs|
Comments