Sally asked me to have the recipe ready early for Glade Road Growing's last 2015 farm share on 11/24.  She says the share will be similar to last week with plenty of carrots and that maybe I could provide a recipe for Thanksgiving dinner, so I thought a roasted carrot salad would be nice.  Lindsey Love has such great photographs on her food blog that I thought I'd share this one, although her recipe (which only serves two) includes shallots and blood oranges and has fennel seeds rather than peanuts and parsley instead of cilantro.


1.  Scrub and roast 1 pound of carrots and half a pound of peeled small onions with the root end cut off   at 475 degrees F for about 20 minutes either in a preheated oven on a cookie sheet lined in parchment paper or, as I do, on a countertop convection oven.

2.  While carrots and onions are roasting, squeeze one orange for the juice into a large bowl. If you like you can also grate about a half a tablespoon of the zest off the orange peel.  Wash two apples, cut in quarters to remove core and then slice thinly with a sharp knife.  Add apples to bowl and toss with the orange juice to keep them from turning brown.   Chop  1/2 cup of fresh cilantro and reserve for topping.

3.  Smash and peel 4 cloves of garlic and chop coarsely.  Chop about a tablespoon of fresh ginger root.

4.  In an oiled cast iron skillet toast 2 tablespoons of sesame seeds until they turn light tan and begin to pop.  Remove them from skillet.  Add enough extra virgin olive oil to coat bottom of skillet and saute the garlic and the ginger until tender.  Let cool a bit and then toss sesame seeds and garlic and ginger with apples.

5.  When the carrots and onions are finished roasting, let cool enough that you can handle them comfortably.  Split the carrots in half lengthwise if they are small.  If they are larger, you may want to cut them in half crosswise and then in quarters lengthwise.  Cut the onions in half and then slice thinly.

6.  Toss in the bowl with the apples and 2 tablespoons of extra virgin olive oil.  Top with roasted unsalted peanuts and cilantro and serve warm or at room temperature. 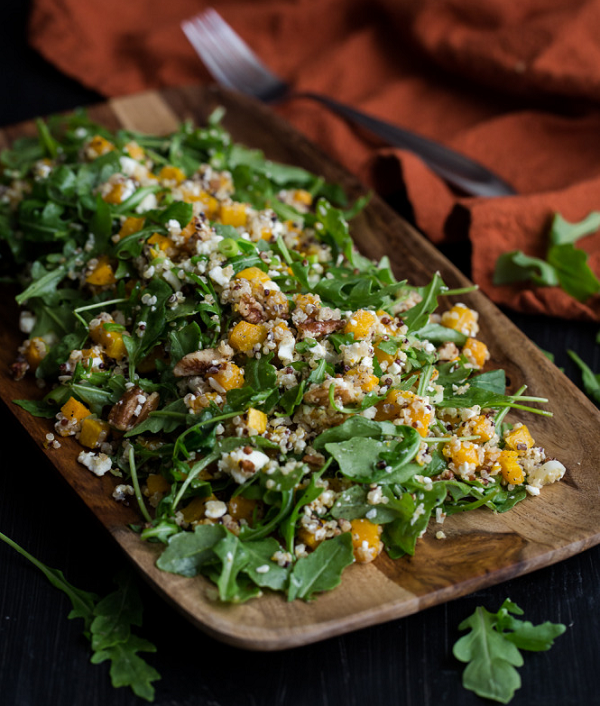 Photo by cookbook author and photographer Erin Alderson for her version of this recipe in her blog NaturallyElla.com

Sally tells me that 11/17/15 the farm share for Glade Road Growing will include butternut squash, carrots, arugula, salad mix, kale, garlic and a big hakurai turnip.  Since the arugula is sweet enough in the cooler weather to eat raw, I thought I'd make a main course salad.  Mine adds pomegranate seeds and uses walnuts instead of pecans and a bit of balsamic vinegar dressing, rather than honey, but this picture was just so beautiful, that when I found it, I stopped looking for something more representative.


1.  Preheat your conventional over to 450 degrees, unless you are going to use a counter top convection over, as I do.   Rinse the butternut squash and cut in half lengthwise and scoop out the seeds and reserve to roast.  Put the squash cut side down on a baking sheet lined with parchment paper.  Roast in oven for about 40 minutes, until tender.  Remove and let cool enough to handle.  Pull the peel away and then dice the squash into 1/2 inch cubes.  (Some folks peel and cube the squash first, but that's not as easy.


2. While the squash is roasting, cook 1 cup of raw quinoa by bringing it to a boil in a heavy-bottomed lidded sauce pan with two cups of cold water.  Remove from oven and drain water and rinse well to remove the saponin, which coats the grain and can make it bitter.  Add 1 3/4 cups of fresh cold water, cover  and return to a boil and simmer for five minutes.  Turn off heat and let sit for at least 20 minutes.

4.  Rinse the arugula in a basin of cool water.  Drain and wash a second time in clean water, then put in a colander to drain.

6.  Fluff the quinoa with a fork and toss with the arugula with the pomegranate seeds and the squash, 2/3 cup of crumbled feta and 1/2 cup of walnuts  in a large bowl.  Drizzle with the vinaigrette and serve. 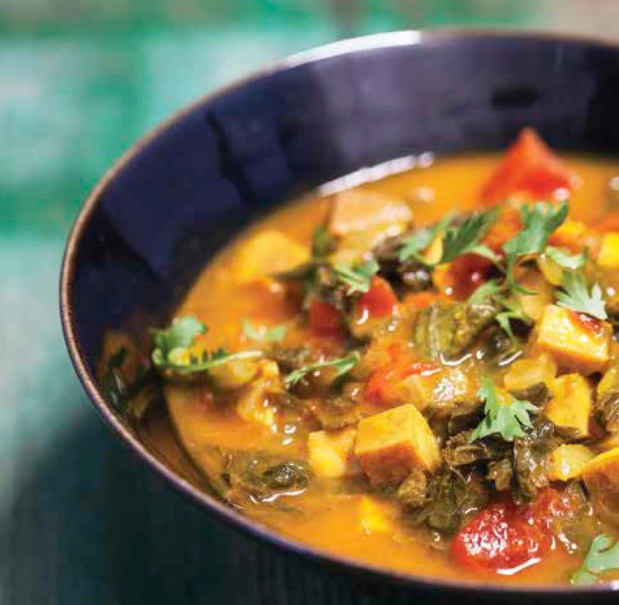 Photo by Paige Green of a mustard green curry and tofu recipe by chef  Bryant Terry of Oakland found in his 2014 cookbook Afro-Vegan.

Since Bryant Terry is an advocate of farm fresh food, I thought I'd modify one of his recipes this week to use the squash, mustard greens, garlic and green peppers. His mentor, Alice Walker, has said of him that “Bryant Terry knows that good food should be an everyday right and not a privilege.” He is a 2015 James Beard Foundation Leadership Award winner who is currrently the inaugural Chef in Residence at the Museum of the African Diaspora (MoAD) in San Francisco.  Maybe some of my lucky friends in that area were able to get a ticket for the (sold-out) November 15 reception and panel he is convening with Toni Tipton Martin, Gail Myers, Nicole Taylor, Caroline Randall Williams and moderator Psyche Williams-Forson to discuss the role that Black women have played historically and contemporarily in the production, distribution, and consumption of food.

Here's an interview with Chef Terry in the Washington Post and a video about his work as Chef in Residence.


By the way, when I was looking at food photos for inspiration, I found a tempting recipe by Emma D'Alessandro for a warm kale, citrus and watermelon radish salad, which for which you could substitute the mustard greens.


1.  The night or at least two hours before cook 1 pound of garbanzo beans.  In a medium saucepan with a heavy bottom and a tight-fitting lid, cover the beans with 3 cups water, and and bring to a boil.  Rinse.  Return to pot, add ½ teaspoon sea salt and bring again to a boil again.  Cover, reduce heat and simmer for 5 minutes. Let stand over night or for at least one hour. Rinse a second time.  Add two cups of water and bring to a boil again and simmer on low heat until soft, about 1 hour with 2 bay leaves.

2.  I like to serve this over brown rice cooked with tumeric and olive oil, so at the same time you start the beans.  In a medium saucepan with a heavy bottom and a tight-fitting lid, combine 2  cups brown rice , 4 cups water, and and bring to a boil.  Rinse.  Return to pot, add ½ teaspoon sea salt, 2 tablespoons of extra virgin olive oil  and 1 teaspoon of ground turmeric and bring again to a boil again.  Cover, reduce heat and simmer for 5 minutes.  Turn off heat and leave for 40 minutes until water is absorbed.

3.  While the rice is absorbing the water, roast the squash.  Unless you are using a countertop convection oven, as I do, preheat your oven to 450 degrees.  Cut  the tetsukabuki squash in half and scoop out seeds.  You can reserve them to roast separately.  Invert upside down on a parchment covered cook sheet.  Roast for half an-hour and then let cook long enough so that you can cut it into cubes.  I leave the skin on and it will get tender, unlike butternut squash.  If you prefer, you can remove the skin.  Set the squash aside.

If you don't have this type of squash, the recipe will work with any roasted winter squash or even roasted sweet potatoes.

3.  While the squash is roasting, peel and chop one large onion or more to make about 1 cup.   Mince a piece of fresh ginger to make 1 tablespoon.  Smash, peel and mince a similar amount of fresh garlic cloves.  Remove the seeds from a green pepper and finely chop.


4.  Grind a cup of roasted peanuts in a heavy duty blender or food processor.  You will use 2 tablespoons for this recipe.  You can store the rest in a covered jar in the fridge.  You can substitute fresh ground peanut butter from the store.  The jars of peanut butter really are NOT a sufficient substitute, but if you need to, you could used about 4 tablespoons of crunchy peanut butter with no additives (avoid the "no-stir" versions.)

4.  In a oiled cast iron skillet, add 1/4 teaspoon mustard seeds and cook, shaking the pan occasionally, until they pop, 2 to 3 minutes.   Add more oil to coat, add the onion and sauté until soft, 5 to 7 minutes. Add  more oil and add the green pepper and sauté until soft about 2 minutes.  Add the garlic, fresh ginger, 1 1/2 teaspoons of ground tumeric, 1/2 teaspoon of cumin seads, 1/2 half teaspoon of cardomon, 1/4 teaspoon of red pepper flakes and cook until fragant.

5.  In a large saucepan with a tight lid, 3 cups of water, one can of diced unsalted tomatoes, 2 heaping tablespoons of the ground roasted peanuts, the vegetable/spice mixture and the cooked garbanzo beans. Stir.  Bring to a simmer and cook for about 20 minutes, stirring occasionally.

6.   While the mixture is cooking, cut the mustard greens into bite-sized pieces.  After the first twenty minutes, add to the saucepan, along with the roasted squash and cook for another ten minutes, stirring occasionally.  Serve garnished with cilantro over the cooked brown rice.

BTW, Chef Terry follows the Southern tradition and cooks the greens for the whole thirty minutes.  Mine will be brighter than pictured. 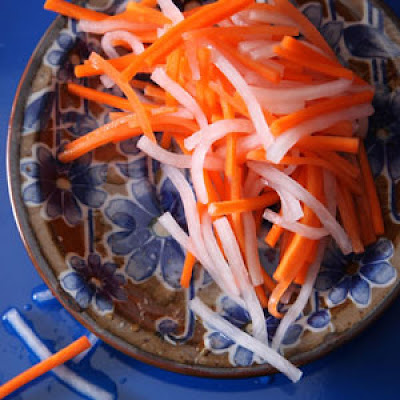 Daikon is a mild white winter radish, which I like as a pickled vegetable, served as a condiment with tofu or chicken, on a barbecue sandwich or added to a tossed salad.  Here's a simple recipe.

2.   In a bowl, combine the carrots, daikon,  2 tsp. kosher salt and 1 tsp. demerara sugar.   Let sit until the vegetables have wilted slightly and liquid pools at the bottom of the bowl, about 30 minutes. Drain vegetables; rinse and pat dry with paper towels. Transfer vegetables to a medium bowl.

3.  Whisk together 1/4 cup sugar, 1/2 cup white vinegar and 1⁄2 cup warm water and pour mixture over the vegetables. Stir to combine. Set mixture aside and let marinate for at least 1 hour, then you can refrigerate, tightly covered, for up to 4 weeks.
Posted by Beth Wellington at 2:34 PM
Pickled Daikon and Carrots
2015-11-02T14:34:00-05:00
Beth Wellington
carrots|CSA|daikon radish|Glade Road Growing|redcipe|SAMPLER|sustainable agriculture|
Comments