The Anatomy of Climate Skepticism 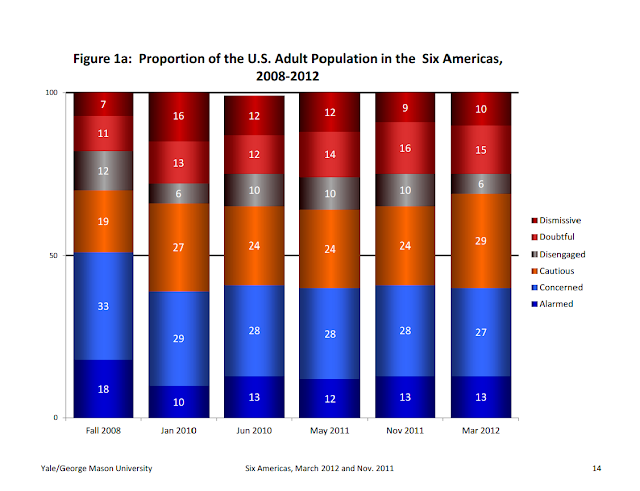 
In  May, 2008,  the journal Environmental Politics published "The organisation of denial: Conservative think tanks and environmental skepticism," by Peter J. Jacques, Riley E. Dunlap and Mark Freeman, who analyzed 141 English-language environmentally skeptical books published between 1972 and 2005 and found that:
They concluded that


scepticism is a tactic of elite-driven counter-movement designed to combat environmentalism, and that the successful use of this tactic has contributed to the weakening of US commitment to environmental protection.

The tactic appears to be working.   That year Yale University defined six segments of  the U.S. population  with regard to their concern about global climate change.  Despite scientific consensus, only just over half the U.S. population fell into the two top segments segments--the Alarmed and the Concerned.  The rest were Cautious,  Disengaged,  Doubtful or even  Dismissive.  And as can be seen in the above chart comparing 2008 through 2011, doubt remains.  And such doubt may be hard to erase.

A new paper, "NASA faked the moon landing--Therefore (Climate) Science is a Hoax:  An Anatomy of the Motivated Rejection of Science" by Stephan Lewandowsky, Klaus Oberauer and Gilles Gignac in Psychological Sciences looked at  climate bloggers and found that endorsement of a laissez-faire conception of free-market economics predicts rejection of climate science and also rejection of other established scientific findings, such as  HIV being the cause of  AIDS and  smoking as the cause of lung cancer.   But it goes further:


We additional show that endorsement of a cluster of conspiracy theories (e.g. that the CIA killed Martin Luther King or that NASA faked the moon landing) predicts rejection of climate science as well as the rejection of other scientific findingss, above and beyond the endorsement of laissez-faire free markets.

The problem, of course, is that it's hard to convince someone who believes in a conspiracy, that no such conspiracy exists:  evidence contrary to the conspiracy is itself considered evidence of its existence.

Posted by Beth Wellington at 7:47 PM