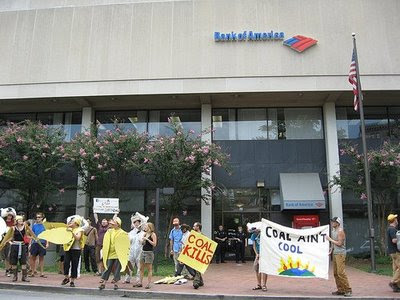 Photograph of the Southeast Convergence action against the Bank of America at the Flickr collection. Other photos at Ashville Indymedia. Audio of workshops via Joseph Puentes. For more information, see the website for the Convergence.

The direct action planners knew that police intended to disrupt a protest at the planned site "within two hours drive of our campite." I'm not sure whether this was at Progress Energy's dirty Skyland coal power plant, as indicated by the police.

As a result of that news, the planners changed the venue to the Bank of America to highlight that in recent years, Bank of America facilitated hundreds of million of dollars in loans to companies like Massey Energy and Arch Coal that are involved in mountaintop removal coal mining.

Two activists locked down inside the main lobby and other activists blockaded the entrance to the downtown Ashville branch. Citizens dressed as canaries and polar bears carried signs and banners that read: “Bank of America Stop Funding Climate Change,” “Bank of America Stop Mountaintop Removal,” “No Coal, No Nukes, No Kidding” “Bank of America Climate Criminal.” Five were arrested and four are still in jail. Bail needs to be raised in the amount of $4,000.

Meanwhile a police helicopter hovered and dozens of uniformed and undercover police deployed from Buncombe, Henderson, and Transylvania Counties surrounded the site of the Southeast Convergence for Climate Action camp and dozens more police arrived at Skyland to prevent protest against dirty energy and climate change.

One of our polar bears commented,

This shows which side of the climate debate the government is on. They have spent tens of thousands of dollars to protect the coal industry today. Clearly if the government wanted to address climate change, they would be sending the police in to arrest the heads of Progress Energy for perpetuating the greatest threat humanity has ever faced - climate change.

The Ashville paper quotes, instead the police and Sorrels a astroturf toady from the nuclear energy industry who had been expelled from the camp saying the change in local was due to disagreements among organizers.

One comment by Gorky at the Guardian's blog about the London action:

It's a collection of explicitly pro-direct-action, proclaimedly anti-capitalist activists. This is, and has been from the beginning, an event primarily organised by very radical people, with a very radical message.

The fact that they have broad support is testimony that large swathes of the British public are prepared to support confrontational semi-lawful mass direct action. The very good reason for this is that it appears to be absolutely necessary: conventional political channels for halting climate chaos being apparently innaffective. And disruptive action has a record of success: the anti-roads movement (which destroyed the Tories' road building programme); and the anti-poll tax movement (which did indeed defeat the poll-tax) are good examples of this. Meanwhile, conventional "media pressure & public lobbying$" type campaigns - Make Poverty History, Stop the War Coalitoin - were totally inaffective.

Of course, there's a limit to the opportunities for massive direct action in such a heavily monitored environment, but I just hope the Camp isn't co-opted by hyper-liberal infiltrators.