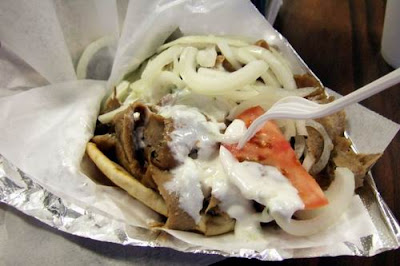 Photo from a blog on low-carb diets.

Since my second cataract surgery was cancelled (twice now) and Rhoda hadn't signed on for a permanent roommate, I spent today loading up what remains out of storage and moving in with Mary Holliman publisher at Pocahontas Press and former Blacksburg Town Council member.

She was entertaining her grandson for dinner, so Mike and I went out to Souvlakis for gyros with tzatziki sauce. If you want to make your own at home, here's Alton Brown's recipe from the Food Network (a channel I became addicted to while living with Rhoda. I've been making yogurt, so maybe I'll pick up a cuke and some mint on Tuesday at Kroger's. Not sure about the lamb. But maybe...

Process the onion in a food processor for 10 to 15 seconds and turn out into the center of a tea towel. Gather up the ends of the towel and squeeze until almost all of the juice is removed. Discard juice.

Return the onion to the food processor and add the lamb, garlic, marjoram, rosemary, salt, and pepper and process until it is a fine paste, approximately 1 minute. Stop the processor as needed to scrape down sides of bowl.

To cook in the oven as a meatloaf, proceed as follows:

Preheat the oven to 325 degrees F.

Place the mixture into a loaf pan, making sure to press into the sides of the pan. Place the loaf pan into a water bath and bake for 60 to 75 minutes or until the mixture reaches 165 to 170 degrees F. Remove from the oven and drain off any fat. Place the loaf pan on a cooling rack and place a brick wrapped in aluminum foil directly on the surface of the meat and allow to sit for 15 to 20 minutes, until the internal temperature reaches 175 degrees F. Slice and serve on pita bread with tzatziki sauce, chopped onion, tomatoes and feta cheese.

To cook on a rotisserie, proceed as follows:

Preheat the grill to high.

Place the yogurt in a tea towel, gather up the edges, suspend over a bowl, and drain for 2 hours in the refrigerator.

Place the chopped cucumber in a tea towel and squeeze to remove the liquid; discard liquid. In a medium mixing bowl, combine the drained yogurt, cucumber, salt, garlic, olive oil, vinegar, and mint. Serve as a sauce for gyros. Store in the refrigerator in an airtight container for up to a week. 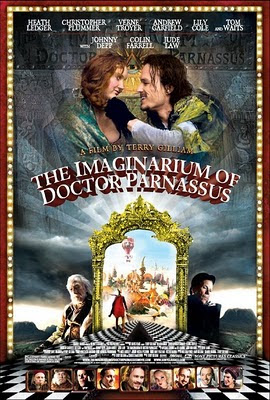 I'm amazed by Gilliam's imagination. The imaginarium is gorgeous: see the 12/18/09 photo essay "Designing the Imaginarium," from CBS News. And, despite the opinion of some other critics, I'd say the story is well told and compelling revisioning of Dr. Faustus.
Posted by Beth Wellington at 10:47 PM
The Imaginarium of Dr. Parnassus
2010-02-26T22:47:00-05:00
Beth Wellington
film|
Comments