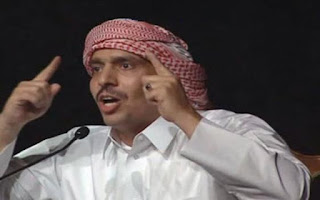 On November 29, 2012,  the courts handed Qatari poet Muhammad al-Ajami a life sentence for “insulting” the Emir, Hamad bin Khalifa Al Thani, and “inciting to overthrow the ruling system” after a video was posted on the internet of Ajami reciting his poetic tribute to the Arab Spring, "Tunisian Jasmine."

Amy Goodman of Democracy Now reported on the conviction here,  including a copy of the video , along with a translation and an interview with  Muhammad al-Ajami's attorney.

Ajami’s lawyer says he has filed an appeal to be heard December 30th. The Emir, however, has the power to pardon Ajami.


As a poet, as an activist, as a citizen,  I value freedom of speech, human rights and social justice.  I call on my own government to right its course, when it falls short.  The Quatari government, like ours,  loses respect when it abuses power.  That's why I urge Qatar to immediately release Mohamed Ibn Al Ajami from prison in conjunction with other Split this Rock poets such as Alice Walker, Philip Levine, Naomi Shihab Nye, Sam Hamill, Chris Abani in signing a petition organized by 100 Thousand Poets for Peace.


Qatar, after all its posturing as a supporter of freedom, turns out to be determined to keep its citizens quiet...Ibn al-Dheeb’s alleged mockery of Qatar’s rulers can hardly compare to the mockery this judgment makes of the country’s posture as a regional center for media freedom.

It's a bit ironic for a U.S. poet to use a Japanese form to protest the suppression of an Arabic poet, but Code Pink, in conjunction with those groups asked for haikus to be read at a demonstration outside the Qatari embassy on December 19.  Here's mine:


You can read the other haikus here.