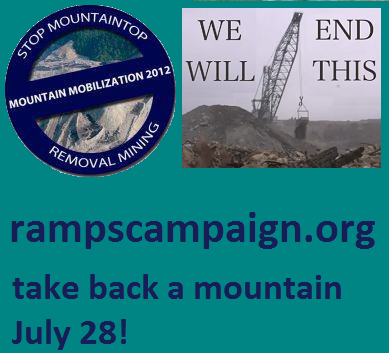 My graphic compiled from RAMPS outreach materials  and a screen shot of  Jordan Freeman's film.  I first published this post on July 28, 2012 at 10:23 a.m.  It was last updated at 10:54 a.m. and will be updated, so keep on checking back.

I've been online with RAMPS (Radical Action for Mountain People's Survival) press liaison off site since 9:39 this morning.  At the  link, you'll find the group's special coverage of the Mountain Mobilization to occupy a strip mine today.  People arriving today  were meeting at the Kanawha State Forest, seven miles south of Charleston, West Virginia.


At 9:02 RAMPS reported that  law enforcement had already arrested one unnamed individual  at the forest before heading to the mine site.

At 9:27 RAMPS reported that law enforcement officers were preventing people from joining each other, detaining their vehicles, searching them and telling them to leave or face arrest for obstruction.

At 9:38 RAMPS reported that according to State Police, 300 - 400 strip miners were marching into Kanawha State Forest from other side.  Lots of State Police on scene.  The question that this raised for me is how did the State Police know about the meeting place?  How did the miners know?  RAMPS let me know that the rendezvous site was mailed to registrants and journalists.

Posted by Beth Wellington at 10:23 AM