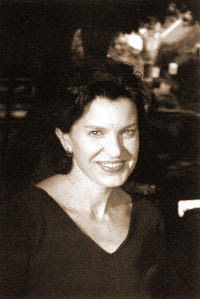 The photograph of Claudia Emerson by her husband, technical designer and musician Kent Ippolito, appeared in Blackbird, VCU's online magazine of literature and art.

Congratulations to the Virginia from Chatham, an assistant professor of English at the University of Mary Washington (UMW) who won the 2006 Pulitizer Prize for Poetry for her third collection, The Late Wife: Poems, published last year by LSU Press.

You can hear her read from the poems at UMW in September of 2005 and at at the Library of Congress, where she was awarded the Witter Bynner fellowship in 2005 by Poet Laureate Ted Kooser (also on the committee selecting the Pulitzer.) Emerson also spoke on the May 22 edition of the Virginia Foundation for the Humanities radio progam, With Good Reason , about how she infuses her poems with childhood memories of growing up in Chatham. I set up an article on Emerson at Wikipedia.

Emerson received her MFA from UNC-G in 1991. Her mentor there, poet and fiction writer Fred Chappell, had this to say to Sean Olson who wrote an article for April 18 University News.

Claudia has always had a clarity about her work,not only in her work, but also in the way she goes about her work. I've always admired that clarity. She had a determination -not to win prizes- but to do the very best work she could, to achieve excellence.

Fred, with whom I studied at the Atlantic Center for the Arts ( the same place that I studied with Bill Stafford) reviewed The Late Wife for the Raleigh, NC. News and Observer on December 25, "Same Mine Yields Different Gems," which also includes a review of One Good Hand, by my SAWC cohort, Dana Wildsmith.

Here are three of Emerson's her poems, used with her gracious permission, which were featured on Poems.com.

I think by now it is time for the second cutting.
I imagine the field, the one above the last

house we rented, has lain in convalescence
long enough. The hawk has taken back the air

above new grass, and the doe again can hide
her young. I can tell you now I crossed

that field, weeks before the first pass of the blade,
through grass and briars, fog — the night itself

to my thighs, my skirt pulled up that high.
I came to what had been our house and stood outside.

I saw her in it. She reminded me of me —
with her hair black and long as mine had been —

as she moved in and then away from the sharp
frame the window made of the darkness.

I confess that last house was the coldest
I kept. In it, I became formless as fog, crossing

the walls, formless as your breath as it rose
from your mouth to disappear in the air above you.

You see, aftermath is easier, opening
again the wound along its numb scar; it is the sentence

spoken the second time — truer, perhaps,
with the blunt edge of a practiced tongue.

There were warnings: he had, at forty, never
married; he was too close to his mother,
calling her by her given name, Manuela,
ah, Manuela — like a lover; even her face

had bled, even the walls, giving birth to him;
she still had saved all of his baby teeth
except the one he had yet to lose, a small
eyetooth embedded, stubborn in the gum.

I would eat an artichoke down to its heart,
then feed the heart to him. It was enough
that he was not you — and utterly foreign,
related to no one. So it was not love.

So it ended badly, but to some relief.
I was again alone in my bed, but not
invisible as I had been to you —
and I had learned that when I drank sherry

I was drinking a chalk-white landscape, a distant
poor soil; that such vines have to suffer; and that
champagne can be kept effervescent by putting
a knife in the open mouth of the bottle.

HomecomingThe camera is trained on the door, no one
in the frame, only the dog sleeping. And then
finally, I see this was to surprise you,
filming your arrival, the dog's delight. Only now,
six years distant, can this seem scripted, meant:
the long, blank minutes she waited, absent
but there — behind the lens — as though she directs
me to notice the motion of her chest
in the rise and fall of the frame, and hear

to understand the one cough, nothing, the clearing
of her throat. Then, at last, you come home
to look into the camera she holds,
and past her into me — invisible, unimagined
other who joins her in seeing through our
transience the lasting of desire.

Here are some links to other Emerson Poems online:

Susan Settlemyre William has "An Interview with Claudia Emerson in Blackbird: An Online Journal of Literature and the Arts, Volume 1, No 2 published on December 16, 2002 Pinion, An Elegy. There's a link to the audio file at the bottom of the page.
She reviewed the book in the same issue.
Note: Here's a nice article that came out April 20 in the Richmond Times Dispatch by Michael Martz: "Pulitzer-winning poet from Chatham Virginia: Professor latest with ties to town to bask in literary glory."
Posted by Beth Wellington at 10:18 PM
Claudia Emerson Wins Pulitzer
2006-04-18T22:18:00-04:00
Beth Wellington
blackbird|claudia emerson|poetry|poets|pulitzer prize|
Comments