Eisenhower: And They Are Stupid

Poster from Labor is Not A Commodity blog

Many have heard of the quotation of Ike on the military-industrial complex, but my friend Mark Barbour brought my attention via his facebook post to a less known Eisenhower quotation about those who would

Something to think about as the Governor of Wisconsin would end collective bargaining for public workers and  Democrats in Indiana have refused to contribute to a quorum, to evade a similar law there.


One favorite tactic in political debate is to put words in the mouth of a respected elder statemen [sic] to make it appear he presciently anticipated some modern issue.

Except, the site continues, the Eisenhower quotation, as used in 2005--when George Bush wanted to privatize Social Security--was not a fabrication and can be found in his 11/8/1954  letter to his brother Ed.

Here's the whole paragraph from the letter:

Now it is true that I believe this country is following a dangerous trend when it permits too great a degree of centralization of governmental functions. I oppose this--in some instances the fight is a rather desperate one. But to attain any success it is quite clear that the Federal government cannot avoid or escape responsibilities which the mass of the people firmly believe should be undertaken by it. The political processes of our country are such that if a rule of reason is not applied in this effort, we will lose everything--even to a possible and drastic change in the Constitution. This is what I mean by my constant insistence upon "moderation" in government. Should any political party attempt to abolish social security, unemployment insurance, and eliminate labor laws and farm programs, you would not hear of that party again in our political history. There is a tiny splinter group, of course, that believes you can do these things. Among them are H. L. Hunt (you possibly know his background), a few other Texas oil millionaires, and an occasional politician or business man from other areas.  Their number is negligible and they are stupid.

Mark noted in quoting Eisenhower  that the splinter group today is the Tea Party.  But, consider that the wealthy backers of the Tea Party, such as the Koch brothers in their opposition to Obama and now their role in Wisconsin,  appear a lot more savvy than Howard Hunt.  They are getting ordinary folks to embrace actions that advance their agenda.


As Ike said, " to attain any success it is quite clear that the Federal government cannot avoid or escape responsibilities which the mass of the people firmly believe should be undertaken by it."

The Koch brothers, et. al., would have you believe that the "mass of people" no longer think government is responsible for the common good.  And media advances this, quoting folks who say that unions were once necessary, but no longer.

Actually, according to the Gallop Poll reported today in USA Today, 61% of folks oppose laws taking away collective bargaining rights for public employees versus 33% who support them.
Posted by Beth Wellington at 8:59 PM
Eisenhower: And They Are Stupid
2011-02-22T20:59:00-05:00
Beth Wellington
Comments 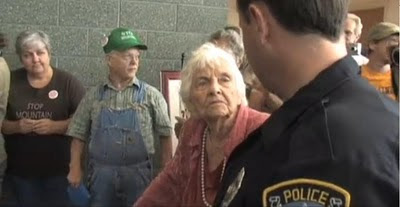 This photograph is a screen shot of Winnie Fox from my friend Jordan Freeman's film Low Coal @ 46:51. Fox is telling the officer at the West Virginia Department of Environmental Protection --aka " Department of Every Polluter"about things "going right down the toilet. The corporations are so corrupt.  They'll do anything to make a dollar."

Juanita "Winnie" Fox would have been 91 this March.  She died this morning after a fall yesterday, according to Janet Keating of the Ohio Valley Environmental Coalition (OVEC), when Fox had served as a Board Member.


I'm thinking of the occupation of [then West Virginia Governor and now U.S. Senator Joe] Manchin's office during Mountain Justice Spring Break 2007. It was Winnie's 87th birthday and we all sang Happy Birthday to her. When the cops dragged her out into the hall and were trying to drag her our of her chair, she said to the cop, "I'm ready to die today. Are you?" A few days later then-state senator Vic Sprouse posted on his blog that he wished the cops had tasered her.

Winnie will always be one of those brilliant examples of someone completely unafraid to call it like it is. She will be sorely missed. What are these raging Grannies in heaven going to do if they get access to the lightning bolts?


Winnie at the big rally near the fountain at the State Capitol—waving a pink (undergarment) slip that was a signal for then-DEP head Stephanie Timberminer to give herself a pink slip. 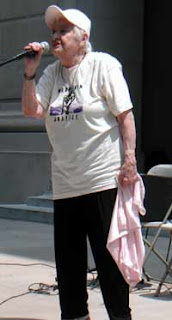 Fox was one of the arrestees June 23, 2009 at at the Marsh Fork School, protesting that the school  sits just 150 feet from  Massey coal silo, under a 2.8 billion gallon toxic coal sludge impoundment held back by only an earthen dam, which is shaken by blasts from the 1,849 acrea mountaintop removal (MTR) site.  The disaster evacuation plan for the school stated that if  the dam broke, the kids at the Pettus Head Start would have 12 minutes before the sludge is 5.7-feet-deep, 31.5 feet in 20 minutes and 72 feet in 30 minutes--that's an average of 4 feet per minute. (I've read the actual plan, but right now it's not available online.  I've written the site to apprise them.)

Fox was using a fancy walker (the kind with the seat) to get about.  I can still see her, decked out in khaki shorts, sunglasses, and white matching tennis shoes, baseball cap and  t-shirt (the latter bearing a message and adorned w. buttons).  With one hand, Fox  steadied herself on the walker.  The other, she raised high above her head in a fist.  Behind her state police were milling about, and behind them, Massey employees and their wives were decked out in their black gear with orange reflective tape. Things were tense that day.  The miners and supporters were restive--one wife shoved Judy Bonds. Others revved their motorcycles to try and drown own the MTR opponents.  There were snipers on the roof.  We walked from the school to the Massey site.  Fox and others including former WV Congressman and Secretary of State Ken Hechler (four years her senior) refused to move off the premises.  Her friends have told me how proud she was to finally get arrested that day (she had been trying for years at other protests.) Here's Viv's photo of Winnie being released from custody. 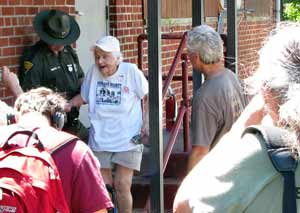 Born in the eastern Kentucky coalfields, Fox's roots as a protester go back to 1930, according to Jeff Biggers,


when she insisted on drinking from a segregated water foundation in Huntington, West Virginia, where her family moved when she was a child...Fox has been involved in stopping reckless pollution in the rivers and watersheds for decades, dating back to her earliest movement against Ashland Oil's pulp mill dumping of toxic material in the waterways.

You can read some of her friends' comments on my facebook post, which is public. Memories of her life have also been coming into the Friends of Mountains mailing list. Here's what Bill Price of the Sierra Club Environmental Justice Program wrote, reprinted with his permission:


Winnie was a strident activist. She was always looking for the next thing that needed to get done (including risking arrest) and always had a kind word for everyone. Except for Bill Raney of course. One of my favorite pictures of Winnie is of her standing over Raney with this fierce look. He looked like he was afraid of being whipped. And I imagine that fear was justified.

[Raney, for those not familiar with his name is President of the West Virginia Coal Association--this link is to a Bill Moyers episode, The Cost of Coal, which includes Raney.  I have no desire to drive more traffic to Raney's site.  Vivian Stockman is searching the archives for a copy of that photo, too,  and I'll post it if she finds it.]


In true Winnie fashion there will be no funeral but instead a party honoring her life.

Please join us this Saturday, February 19, at Wesvanawha, 825 4th Avenue in Huntington from 7:00pm-8:30pm.   All are welcome.  I know that she had many friends at OVEC and throughout the community so please spread the word and pass this along.

Her daughter, Jan Fox, sent on a draft of the obituary:

Juanita “Winnie” McClure Fox, 90, died on February 16, 2011 at Saint Mary’s Hospital.  She was preceded in death by Jack Leo Fox, her husband for more than 50 years. She was an outspoken environmentalist and fiercely committed to social justice her entire well-lived life. In 2010, she was presented the West Virginia Environmental Council’s Mother Jones Award.   She was the loving mother of John Fox of Logan, WV, Jim Fox of Huntington, WV, Dr. Julia Fox of Eugene, OR and Dr. Jan I Fox of South Point, OH.   She was the grandmother to Wendy  McQuad of Albany, OH, Jack Fox of Logan, WV,  Jim Fox of Mount Vernon, OH, Dr. Melissa Fox of South Charleston, WV, James Paul Fox of Huntington, WV, Vlad and Che Fox-Cisco of Eugene, OR, Catherine and Bethany Cremeans of Cincinnati, OH.  A celebration of her life will take place on Saturday February 19th, 2011 from 7:00 pm – 8:30 pm at Wasvanawha’s at 825 4th Avenue in Huntington, WV.  In lieu of flowers, donations may be directed to OVEC, PO Box 6753, Huntington West Virginia 25773 or  CRMW,P.O. Box 651,Whitesville, WV 25209

Although, like Fox,  I was there that day at Marsh Fork, I never had the chance to talk with her, unlike her lucky friends, who shared many conversations over the years.  But,  I have had the opportunity to read her words, speaking truth to power:  she often wrote letters to the editor of  the Huntington Herald-Dispatch.   I'll quote from her in an upcoming post, "What Would Winnie Say."  Right now I'm due at Roanoke College, ironically, for a reading and symposium at Roanoke College, "Writing about Grief:."
Posted by Beth Wellington at 6:35 PM
Winnie Fox, ¡Presente!
2011-02-16T18:35:00-05:00
Beth Wellington
coal|mtr|Winnie Fox|
Comments