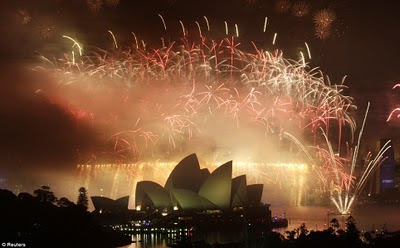 Reuters photo of fireworks above the Sydney Opera House published in the Daily Mail.

Looks a bit like Roanoke's Taubman Museum of Art (but less shoehorned in): 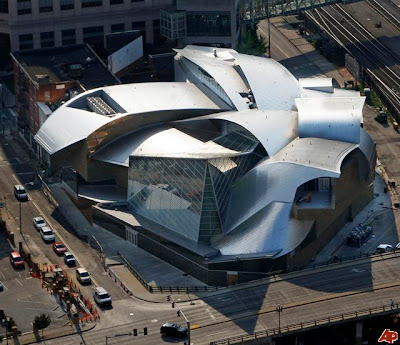 The "noughties" are gone. To celebrate the New Year Barry and I tried out Zeppoli's Italian restaurant across from University Mall in Blacksburg. Mussels in garlic butter (the poor woman's snails until they rename slugs--a la Patagonian tooth fish, which is so successful at luring diners as Chilean sea bass that it is seriously overfished )

And Barry brought gifts. Books: The Appalachians (the companion to the pbs film by Mari-Lynn Evans, who also brought us Coal Country); The Complete Novels of Flann O'Brien, Chief of Station, Congo, The Given Day (Dennis Lehane), and Just Enough Liebling.

Plus a tin of brownies from the recipe in Moosewood Cookbook. Until Barry disabused me of the notion, I believed my mother's dictum that no one could make brownies like Duncan Hines. Actually brownies are easy. Unfortunately, neither Moosewood nor Mollie Katzen has the recipe up online, although there are lots of other good ones archived, as well as links to other sites. But, Heidi Swanson has the recipe posted with permission here at her site, 101cookbooks.

And if you want a recipe for a fudgier brownie, here's one by Annemarie Huste, who once said on a cable tv cooking show that she used to make these ones for John John Kennedy:

In a heavy saucepan melt the chocolate with the butter over low heat stirring constantly. When the chocolate is melted put aside to cool. In a mixer combine eggs, sugar, salt and the vanilla extract and mix until light and fluffy. Then add the melted and cooled chocolate. Combine well and fold in the flour and pecan nuts. Line a jelly roll pan with parchment paper, rubbing both the pan as well as the paper with a little vegetable oil. Pour the brownie batter into the preheated pan and bake in your preheated 325 degree F oven for 25 minutes.

Note: The brownies will be very fudgy inside and not dry. When cooled, cut them into 1″ squares.