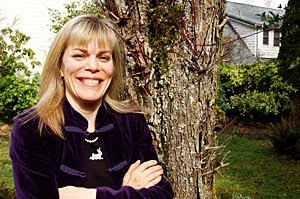 If you're interested in hearing the music of Paula Sinclair who has set the words of some of her favorite writers (including Bill Stafford, , Joseph Millar, Dorianne Laux, Debbie West, and Jarold Ramsey) to music, you can check out the album, The Good Horse at CD Baby.

She says her next project is A Story That Could Be True based on 11 Stafford poems and that she also has plans to turn the poem/song "The Animal Who Drank Up Sound" into an animated film.
Posted by Beth Wellington at 11:08 PM