NYT McCaffrey Expose: No Credit to Other Journalists 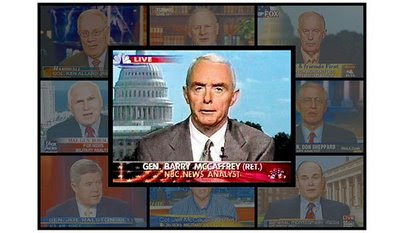 Photo illustration by the NYT.

In the spring of 2007 a tiny military contractor with a slender track record went shopping for a precious Beltway commodity.

The company, Defense Solutions, sought the services of a retired general with national stature, someone who could open doors at the highest levels of government and help it win a huge prize: the right to supply Iraq with thousands of armored vehicles.

Access like this does not come cheap, but it was an opportunity potentially worth billions in sales, and Defense Solutions soon found its man. The company signed Barry R. McCaffrey, a retired four-star Army general and military analyst for NBC News, to a consulting contract starting June 15, 2007.

Four days later the general swung into action. He sent a personal note and 15-page briefing packet to David H. Petraeus, the commanding general in Iraq, strongly recommending Defense Solutions and its offer to supply Iraq with 5,000 armored vehicles from Eastern Europe. “No other proposal is quicker, less costly, or more certain to succeed,” he said.

Thus, within days of hiring General McCaffrey, the Defense Solutions sales pitch was in the hands of the American commander with the greatest influence over Iraq’s expanding military.

“That’s what I pay him for,” Timothy D. Ringgold, chief executive of Defense Solutions, said in an interview.

General McCaffrey did not mention his new contract with Defense Solutions in his letter to General Petraeus. Nor did he disclose it when he went on CNBC that same week and praised the commander Defense Solutions was now counting on for help — “He’s got the heart of a lion” — or when he told Congress the next month that it should immediately supply Iraq with large numbers of armored vehicles and other equipment.

As I noted in my review over at NewsTrust, this article is not as enterprising as it would appear. What disturbs me is that Barstow, like other reporters at the NYT often pretend to a scoop that builds on uncredited info from previous articles in supposedly "lesser" sources. For instance, in "Disclosures on Palin Raise Questions on Vetting Process," Elisabeth Bumiller, on 9/2/08, fails to acknowledge that Anchorage Daily News reporters Sean Cockerham and Wesley Loy published interviews with many of the same folks on August 29 in "Choice stuns state politicians." (For details and links, see my blog post of September 1, Sarah, Who?. In the current case, as Glenn Greenwald notes in "The ongoing disgrace of NBC News and Brian Williams" (see link), "Some of the key facts which Barstow reports concerning the improper behavior of McCaffrey and NBC News were documented all the way back in April, 2003, in this excellent article from The Nation, which Barstow probably should have credited today. " I've linked to the Nation article, "TV's Conflicted Experts" by Daniel Benaim, Priyanka Motaparthy and Vishesh Kumar (two former interns and a free-lancer.) Although Greenwald doesn't say so, Barstow also failed to credit Grennwald's own April 2008 coverage, "Brian Williams' 'response' to the military analyst story". (see link)


The corporate ownership of news media is rife with potential conflicts of interest, which in turn, affects the quality of our democracy. NBC News, of course, is owned by GE, which has been awarded $8,761,071,362 in defense contracts during the period 2000 to 2007, according to informatioin pulled from ublic records by Governmentcontracts.com. (see link) This, despite, GE being fined for fraud in such contracts during the previous decade, according to the corporate entry at Crocodyl, a collaboration between nonprofit organizations such as Center for Corporate Policy, CorpWatch, Corporate Research Project and others (see link.) Although NBC News is not alone in its hiring of supposedly unbiased military commentators, as Matt Iglesias notes in his post, "war Machine," "again, we now have NBC News caught flat-out in the midst of corruption, deceiving their viewers. And NBC News isn’t sorry. They’re not apologizing. They’re not ashamed. Because they’re beyond shame. They never had a reputation for honor, so they don’t even see this sort of thing as damaging." (see link)


BTW, Check out http://open.salon.com/
Posted by Beth Wellington at 4:55 PM