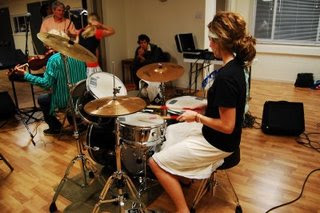 Photo from Amanda's post on the Possums from her Virgin Island blog. Like the Zisettes, she's a member of the LDS church. She says that Jane told her that Greensboro contra dancing was

Tonight the Possums will be at the CEC in Blacksburg. That's

They play a hot combination of southern tunes, old time, Celtic, jazz and folk. According to the Birthplace of Country music, where they played in May,

The name Toss the Possum was inspired by a possum who found itself trapped under a spare dresser drawer in the family’s garage. Chas, upon seeing the upside down drawer moving mysteriously of its own volition around the garage floor, yelled for everyone to come and see.

Here's what was written about the background of the band members:

Rob Zisette, age 15, is the fiddler for Toss the Possum. After playing violin for a year and a half, he entered the fiddle contest sponsored by the Festival of the American West at age 10. He won first prize and has been fiddling ever since. Rob also likes to compose and is a percussionist in the Radford High School Band. Occasionally he’ll pick up the drumsticks at a dance. Chas, age 17, taught himself to play bass as soon as he realized the family band was forming without him. Sometimes he plays his sax with the band. Chas’ claim to fame is that he can play ‘Ode to Joy’ on 16 different instruments. Jane, age 19, began playing flute when she was 12. Soon after, she heard Joannie Madsen play her whistles with Cherish the Ladies and decided to add the Irish whistle to her repertoire. Jane plays on Patrick Riordan whistles. Jane also sings with the band. She has been accepted as a flute performance major at BYU Idaho. Laura (mom) taught Piano at Utah State University until she moved to Virginia. In Utah she played with Barnstorm and Leaping Lulu. Now she’s hanging on for the ride with Toss the Possum. Charlie, (dad) of course, is the most important member of the band. Not only has he picked up sound engineering and springs for food after the gigs, but the kids have dubbed him the ‘instrument Sherpa".

Hm-m-m. Smelly mountain hippie people? Wonder if that includes us?
Posted by Beth Wellington at 6:56 PM