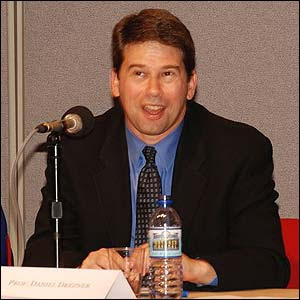 Photo of Dan Drezner from the BBC.

Daniel W. Drezner (web site, email) associate professor of International Politics at Tufts University, has an interesting article in the Chronicle of Higher Education on the effect of the internet on intellectuals in public life, positing that

...critics fail to recognize how the growth of blogs and other forms of online writing has partially reversed a trend that many cultural critics have decried — what Russell Jacoby called the "professionalization and academization" of public intellectuals. In fact, the growth of the blogosphere breaks down — or at least erodes — the barriers erected by a professionalized academy.

In checking his blog, he actually gave this as a paper back in May and has some dialogue there with those who interacted with him at the time. His blog makes interesting reading. I'll be adding him to my list.
Posted by Beth Wellington at 11:20 PM