The Right Latches Onto Obama and Coal 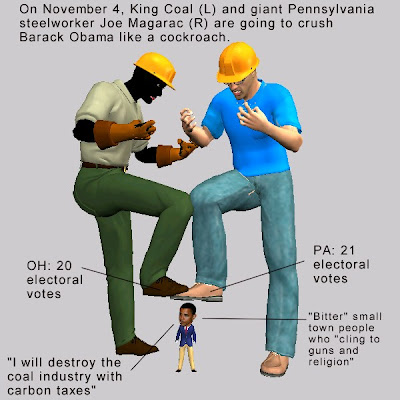 This dreck from the Stentorian, who says that Obama is powered by hate? (No, I am not going to boost his technorati score by linking.) Magarac was a mythic steelworking Paul Bunyan, whose story was recorded by the New Christy Minstrels on their 1964 Columbia Records release Land of Giants:

We're gonna build a railroad down to Frisco and back, and way down to Mexico. Who's gonna make the steel for that track? It's Joe... Magarac.

The top meme today started with claims of "hidden audio" at the SF Chronicle in which Obama said that his clean air regulation would bankrupt coal. Of course the audio was hiding in plain hearing. The coal industry weighed in that they were displeased.


Ben Smith at Politico has this excerpt in his post, "Bankrupting Coal?" which was not available at the paper's site (there was an audio tape and a video and partial transcripts on the rightward blogs that cherry-picked Obama's remarks.)

Barack Obama: I voted against the Clear Skies Bill. In fact, I was the deciding vote. Despite the fact that I’m a coal state. And that half my state thought that I had thoroughly betrayed them. Because I think clean air is critical and global warming is critical. But this notion of no coal, I think, is an illusion. Because the fact of the matter is is that right now we are getting a lot of our energy from coal. And China is building a coal-powered plant once a week. So what we have to do then is figure out how can we use coal without emitting greenhouse gases and carbon. And how can we sequester that carbon and capture it. If we can’t, then we’re gonna still be working on alternatives. But...let me sort of describe my overall policy. What I’ve said is that we would put a cap and trade policy in place that is as aggressive if not more aggressive than anyone out there. I was the first call for 100% auction on the cap and trade system. Which means that every unit of carbon or greenhouse gases that was emitted would be charged to the polluter. That will create a market in which whatever technologies are out there that are being presented, whatever power plants are being built, they would have to meet the rigors of that market. And the ratcheted down caps that are imposed every year. So if somebody wants to build a coal-powered plant, they can. It’s just that it will bankrupt them because they’re going to be charged a huge sum for all that greenhouse gas that’s being emitted. That will also generate billions of dollars that we can invest in solar, wind, biodiesel, and other alternative energy approaches. The only thing that I’ve said with respect to coal--I haven’t been some coal booster. What I have said is that for us to take coal off the table as a ideological matter, as opposed to saying if technology allows us to use coal in a clean way, we should pursue it. That I think is the right approach. The same with respect to nuclear. Right now, we don’t know how to store nuclear waste wisely and we don’t know how to deal with some of the safety issues that remain. And so it’s wildly expensive to pursue nuclear energy. But I tell you what, if we could figure out how to store it safely, then I think most of us would say that might be a pretty good deal. The point is, if we set rigorous standards for the allowable emissions, then we can allow the market to determine and technology and entrepreneurs to pursue, what the best approach is to take, as opposed to us saying at the outset, here are the winners that we’re picking and maybe we pick wrong and maybe we pick right.

Jake Tapper over at ABC posted the same excerpt a bit later with his post, "Republicans to Try Burning Obama on Coal." He also reports on a robocall, giving a link to listen to the call. He explains the context of Obama's statement which provides valuable background for readers, as the noise over Obama's interview rises on the web. Tapper does not put Obama's position in context, however, nor write about how it compares with McCain's position.

And over at ThinkProgress, while he writes from the left, Brad Johnson lays out the facts behind his observation that both candidates have supported cap and trade in "McCain And Obama Criticize New Coal Plants — Right Wing Goes Insane."

On a different topic related to the election, in covering a Biden speech, Glenn Greenwald writes on the perversion of the meaning of Commander-in-Chief in "The Single Worst Expression in American Politics."
Posted by Beth Wellington at 6:02 PM