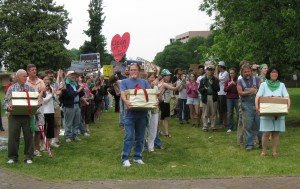 Photo of from Southern Appalachian Mountain Stewards of the earlier attempts at legal protest --presenting a mile-long petition against the Wise County Coal plant-- before BREF and others tried non-violent civil disobedience.

In "Taking On King Coal," Time's Bryan Walsh reports for the first time November 6 on the protest against Dominion on September 15:

Nothing could sway the Dominion 11 from their mission--not the cops and certainly not the prospect of free food. Early on the morning of Sept. 15, activists from a range of environmental groups formed a human barrier to block access to a coal plant being built by Dominion in rural Wise County, Virginia. As acts of civil disobedience go, this wasn't exactly Bloody Sunday. The police took a hands-off approach and even offered to buy the protesters breakfast ...

Nothing deep here, but it's nice to see the coverage.
Posted by Beth Wellington at 9:08 PM