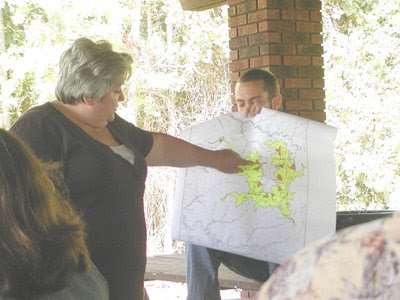 Photo of Coal River Wind organizers Loreli Scarbro and Rory McIlmoil making a presentation which accompanied an August post on the project at WVBlue.

Just received this news release from Rory McIlmoil over at Coal River Wind. The West Virginia DEP has approved Massey's MTR permit revision. Could you circulate this action alert and press release widely. They need our help from all over the country to once again ask Governor Manchin to do the right thing for the state and for local residents by preventing the wind potential and the opportunity to stabilize and diversify the local economy from being permanently destroyed by Massey's Mountaintop Removal operation on Coal River Mountain.

Call the Governor's office at 1-888-438-2731 and letting him know that you support Clean Wind Power, not Mountaintop Removal coal mining for Coal River Mountain. Visit visit www.coalriverwind.org to learn more and sign the petition, and when you're done, get your friends to do the same. And if, like my friend Denise Clendening in California, you can't get through on the toll-free number, you can also call Governor Manchin's regular number:

By the way, Denise also sent me a link to Devilstower's blog over at Kos. He writes eloquently:

Feeling a post election letdown? Looking for another dragon to slay? Buddy, have I got a mean, scaly, ugly one for you.

Coal River Mountain in West Virginia is a beautiful forested area surrounded by communities with long experience with coal mining as been practiced for decades. How long have these folks been settled around the mountain? Many are descendants of those who moved to the area on land grants given soldiers in the Revolutionary War. Now the mountain itself is threatened by coal mining as it's been practiced under the Bush administration -- mountaintop removal.

Just yesterday, a permit to start blasting the top off the mountain was awarded to Massey Energy, headed by Don Blankenship. Who is Don Blankenship? He's the guy who spent millions putting his own man on the West Virginia Supreme Court so he could get out of a lawsuit. Then, when he was caught vacationing in Monaco with that judge, he bought himself another. And another. He spent millions on smear campaigns so he could get his own brand of justice. He's the guy who was named the scariest person in America when it comes to the environment. This is the guy behind the death of miners in the Aracoma mine after hundreds of safety violations.

This is a guy who makes $15 million a year, and spends as much as $9 million of it reshaping West Virginia into a deep red state that supports his strong arm tactics. You think West Virginia has an "Appalachian problem?" No. It has a Don Blankenship problem.

Now Blankenship has Coal River Mountain in his grip, and if he has his way, it will soon join more than a million acres of ancient mountains, towering forests, and free-flowing streams that are turned into the acidic rubble left behind after mountaintop removal mining. And perhaps worst of all, Coal River Mountain has already been studied as a site for a wind farm. This wind farm would produce more energy than the coal that Blankenship will get from blasting down the mountain. It will employ more people. And it will do it cleanly, preserving both the mountain and the surrounding communities.

You can sign the petition in support of the Coal River Wind project, but today that's not enough.

There's only one man that can put the brakes on Blankenship before he starts knocking down Coal River Mountain forever. That man is West Virginia Governor, Joe Manchin. Manchin is a Democrat, and he has good reason to dislike Blankenship. The Massey CEO sued the governor after for violation of his first amendment rights when Manchin said he was going to look more closely at serial-violator Blankenship's operations. Apparently Don Blankenship believes that the first amendment includes not just speech and religion, but also bribery and evasion.

Despite all that, it's not expected that Manchin will step in to stop Massey from taking down Coal River Mountain. Not unless you help. Call Governor Manchin at 1-888-438-2731 and ask him to put a hold on this permit. Now. Like pronto.

The fight didn't end on election day. Get on the phone and let people know that change is coming to West Virginia, and it starts at Coal River Mountain.

Okay, here's the news release:
Governor Manchin sides with Massey Energy Coal Company to allow blasting on Coal River Mountain
Skirting their responsibilities to the public, the West Virginia state government has approved the Bee Tree surface mining permit revision on Coal River Mountain in West Virginia, thereby authorizing the destruction of a portion of the available wind resource that local residents would like to see developed as an alternative. Coal River Mountain Watch and community residents learned yesterday that the Department of Environmental Protection (DEP) had approved Massey Energy's revision of the Bee Tree mining permit for Coal River Mountain, meaning that Massey may begin blasting whenever they are prepared to move forward. Repeated attempts at obtaining public hearings related to the proposed mining have been denied by the DEP, and so community members are again asking Governor Joe Manchin to halt the mountaintop removal operation and act on his commitment to renewable energy and to the citizens of West Virginia. Extensive research has shown that Coal River Mountain has enough wind potential to provide electricity for between 100,000 and 150,000 homes, forever, while creating approximately 50 well-paying, permanent jobs in an area long dependent upon sparse, temporary coal mining jobs. The wind farm would also generate as over ten times more county revenue than the Mountaintop Removal operations would, and in a county with a poverty rate of 18.5%, this additional income would help to stimulate new economic development projects and the creation of new and lasting jobs for the county. Overall, a wind farm stands as a more beneficial land use for Coal River Mountain, but this opportunity depends upon the mountain being left intact. Despite the fact that both the Governor and the DEP have been presented with solid evidence supporting the wind farm option, neither have acted to place a hold on the proposed mining. While Governor Manchin has ignored public opinion in support of a Coal River Mountain wind farm, the DEP has continued to exclude public comment on the mining permits, and now Massey Energy is now set to begin blasting.