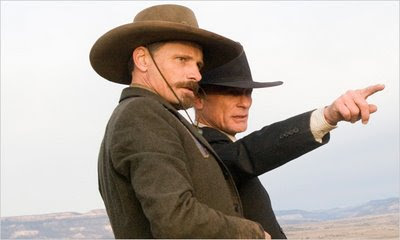 Photo by Loney Sebastion at Warner Bros. accompanied A. O. Scott's NYT review of Appaloosa, directed (and written in part) by Ed Harris.

Based on Robert Parker's 2005 novel of the same name, this film is at it's heart a sly (offscreen) sex farce with the real love between Hitch (Viggo Mortensen) and Virgil Cole (Ed Harris.) Also starring Jeremy Irons as the villian Bragg and Rene Zellweger as the Widow French.
Peter Travers's review and Roger Ebert's are worth reading.
Posted by Beth Wellington at 6:59 PM