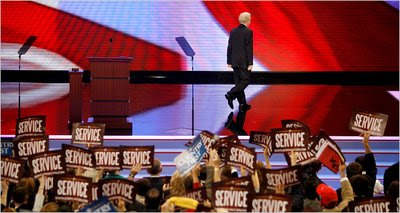 In German, "Lieber means "dear" or as they say in French, "cher" or in Italian "caro" or in Spanish "querido." One wondered which Democrat could call this man "lieber" after he displaced the duly nominated candidate from his former party with the help of Republicans, told a talk radio host that Obama was far to the left of the country and then then spoke against Obama at this summer's Repub convention, saying

In the Senate, he has not reached across party lines to get anything significant done, nor has he been willing to take on powerful interest groups in the Democratic Party.

So, will he lose his Chairmanship? I predict no. No matter that Leahy told Vermont Public radio he should be kicked to the curb

I would feel that, had I done something similar, I would not be chairman of the Senate Judiciary Committee in the next Congress.

As a chairman of one of our significant committees in the Senate, not just going off and supporting a presidential candidate of the other side but also criticizing the candidate on our side, and also involving himself in a couple of senate races on the other side. The question is, is that acceptable? The answer is no.

The Dems have shown there invertebrate tendencies and now there's the implication that Obama has signaled his support.

Posted by Beth Wellington at 9:42 PM