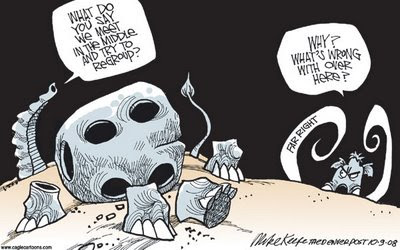 We should all be well versed by now on the does and don’t of nation building. You help the moderates in the country, even if you don’t like them, in order to empower them and isolate the radical elements. Easily said. Hard to do. Democrats are now faced with the need for some serious party-building – isolating the radicals in the party by embracing the more levelheaded moderates in the party.

He's talking about reacing out to Republicans. Some at NewsTrust read this as advice the R's and found fault with the taxonomy errors.

I, on the other hand, took it as advice to the D's and while the family tree may be mislabeled, I think Pizzo makes a valid point that more and more of the moderating forces in the Republican party have been thrown out by voters and this will make it harder for Democrats. ( To this, I would add that many have retired voluntarily--while Lincoln Chaffee was voted out, Tom Davis and John Warner of VA retired.)

James Joyner points to a George Will column (both linked below)

After the 1936 election, when the Republican nominee against FDR, Kansas Gov. Alf Landon, carried only two states, both in New England (hence the jest, “As Maine goes, so goes Vermont”), there were 29 congressional seats in New England and Republicans still held 15. With Tuesday’s defeat of Connecticut Republican Chris Shays, Democrats hold all 22 New England seats. As recently as 1996, when New York had 31 House seats, Republicans held 14; after Tuesday, they have just three of 29. With the loss of the seat on Staten Island, Republicans will hold at most one urban seat.

Both Joyner and Will are conservative Republicans and thus qualified to offer advice to their party, except according to the judgment of those who want to exile anyone who expressed doubt about McCain/Palin--see Douthat in The Atlantic). That meltdown makes me wonder what happened to Reagan's Eleventh Commandment:

Thou shall speak no evil of a fellow Republican?

It harkens back to the time here in Virginia when I observed whippersnappers being rude to mountain Valley Republican and former cabinent member Rod Layman for refusing to support Ollie North.

And of course, even some New England R's think they need an even firmer message. See Peyser.