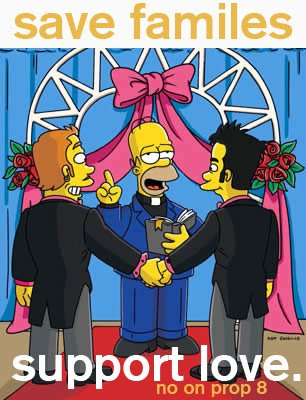 Poster whose providence I could not i.d. Sure looks like Matt Groening, but who knows?

In "Losing California," The Volokh Conspiracy's Dale Carpenter, a U of MN civil rights professor, combines heart and fact in an effective way.

Mostly, my heart breaks for the gay couples and their children who had a five-month window in which their families could celebrate the ultimate expression of commitment and love our culture knows. There was nothing academic about any of this for them....They want their families and communities to understand how much their relationships mean and how fiercely they will fight to protect the children they love....

For those who advocate civil union or domestic partnerships for gays and lesbians, the precedent that "separate is inherently unequal" would require states to sanction marriage for no one or anyone. In the former case, the marriage would be left religion. Politically, though, current lack of support in the general public means that insistence on marriage, rather than domestic partnership, may be a case of the perfect being the enemy of the good. Familiarity breeds comfort, not contempt. The problem, of course, is that when law goes beyond the conventional comfort zone, there is a long period before emotion catches up to the law. And those who disagree with such changes, play to hatred and fear, to maintain the now illegal status quo.

Andrew Sullivan reflects on the topic in "Oh, No, You Don't"

Posted by Beth Wellington at 7:49 PM