Obama Wins, Goode May Be Gone, Mitch Not Ditched 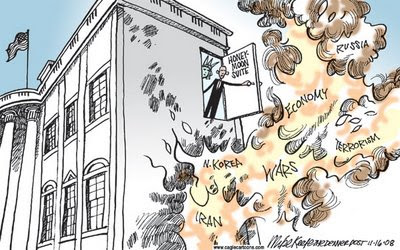 Mike Keefe (website, email) The Denver Post on what Obama has inherited (from 11/14/2008). Most of the immediate images were of Lincoln being happy.

When I voted at the Newport Rec Center this morning, it look like the Dems had conceded Giles County. They had no poll watchers as compared to two for McCain, although they did have a smattering of yard signs. BREF was writing in Matt Hepler against incumbent dem Rick Boucher for the 9th Distric Congressional seat. I got an email from Wise County the the teachers there were writing in the Green candidate. Both because of Boucher's stalwalt support of handouts for the coal industry and refusing to support roadblocks to MTR such as the Clean Water Protection Act.

Watched the election results tonight over at the Spanish House on a variety of sources. After two elections where it looked like Bush would lose, the networks were being cautious in projecting a win for Obama. CNN called PA for Obama at 7:40 p.m. despite the last minute attempt to portray Obama as wanting to bankrupt the coal industry, but that only gave Obama 102 electoral votes to McCain's 49. About an hour later, at 8:34 CNN called Ohio for Obama. He had already won Michigan and Minnesota. Ky went for McCain--no surprise, but the insipid candidate the dem party hacks put forward against Mitch McConnel failed to unseat him. (more on that later, after I check in with Betsy, who lives there. It looks like Virginia will go for Obama and at 10:00 CNN suddenly (it seems) projects Virginia the winner. To tell you the truth, we are a subdued group. Happy, but no ecstasy here. We leave and, ever the news junky, I go elsewhere to watch the McCain gracious concession speech (amid boos), Obama's victory speech and Comedy Central's take.

It looks like Tom Perriello may have ousted Virgil Goode. And the Franken-Coleman race is too close to call. Other interesting reading for election day: Nate Silver on the problem with exit polls. How Tim Robbins had trouble voting in NYC. The Fox meme on the Panthers plot to disrupt voting. Lieberman's further diffection from his former party. Forensicon's news release that a security firm lining up vendors to assist the Republican National Committee with consulting related to potential allegations of computerized voter fraud had contacted the Chicago computer forensics company last Thursday.
Posted by Beth Wellington at 11:51 PM