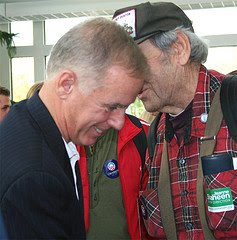 Photo by Flickr's "Zanti Misfit" of Dean on campus in NH on October 13.

The WaPo's Chris Cillizza reports in "Dean to Step Down as DNC Chair,"


Grassroots -- and netroots -- activists, who propelled Dean's presidential bid and then helped get him elected as chair of the party in early 2004, love the former Vermont governor and credit his chairmanship of the DNC with the rebirth of the Democrats as a national party. (Dean's pioneering accomplishment during his four years in office is the 50-state strategy, a plan that put Democratic staff and organizations on the ground in every state...


This is breaking news on a reporter's blog and as such demands a further story in greater depth. See Memorandum's record of other coverage.

What I like, though, is that Cillizza credits the reporter at a new media source, The HuffPo, with breaking the story and provides links to other sources on background, such as the 50 state strategy, the strategic disagreements between Dean and Rahm Emanual, Bill Clinton's eventual acceptance of Dean's stategy, etc. I would have liked a bit on what's happening on the Republican side, and have thus linked to the Atlantic piece which covers both parties, but without much depth. I also have a link below to the Huff Po piece which broke the story, but is too unsupported in its speculations to win my recommendation and reads somewhat like a tribute to Governor Dean, rather than straight news. I also linked to the WaPo's earlier story on the Emanuel-Dean rift and to a Nat'l Journal piece on Clinton's support. The horse race stuff for Dean's replacement is too brief to be of much value, as more than a list, and I'm wondering why David Plouffe is not even there among those considered. There's no mention in this story of other possible roles for Dean in the party. Maybe that will come later. Curiously, only Fox news cites a source for an interview on Dean's resignation, DNC Secretary Alice Germond.

Dean has been willing to stand up to the party insiders. Obama would be well served to appoint someone who will continue to do likewise. The contest for his position, of course, was made possible by the fact that the Dems lost the 2004 presidential race. With a win, it will be interesting to see who Obama recommends for this position. If the Dems were taking advice from an independent, I'd recommend someone not eligible to run as a governor and not already in Congress/with a good shot to win a position. By the way, for those to whom Alice Germond's last name seems familiar, here's a piece of journalism history: her husband Jack is a retired political reporter for the defunct-since-1981 Washington Evening Star, at one time, the WaPo's competitor. Haynes Johnson, who won a Pulitzer for his reporting on the civil rights movement there, is now a journo prof at U of MD. )

Posted by Beth Wellington at 10:20 PM