What ever happened to 1% for the imagination? 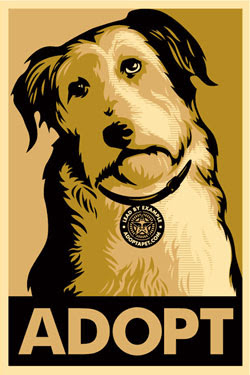 Pets are non-partisans, but should the arts be, too?

Back on February 2 my friends DC poets Ethelbert Miller and Melissa Tuckey, along with the executive director of the Institute for Policy Studies, had a piece in The Nation call for 1% of the stimulus package to go to the arts. After all, the Works Progress Administration.

Another friend--Amanda Michel--now has a job now tracking stimulus funds for ProPublica. I had collaborated with her on election coverage when I was community developer for NewsTrust and she ran Off the Bus for the HuffPo. So, I thought, why now take a look at what's going on with stimulus funds and the arts here in Virginia.

Over a year ago, on August 2, San Francisco Chronicle reporter Chris Cadelago(email) had observed that the Obama campaign

has an official arts policy committee, which is co-chaired by Margo Lion, the Broadway producer, and George Stevens Jr., founder of the American Film Institute. It calls for a national reinvestment in the arts as well as a national arts corps, made up of young artists who could work in inner cities.

Novelist Michael Chabon had even drafted an introduction to the arts policy.

America's artists are the guardians of the spirit of questioning, of innovation, of reaching across the barriers that fence us off from our neighbors, from our allies and adversaries, from the six billion other people with whom we share this dark and dazzling world...Art increases the sense of our common humanity. The imagination of the artist is, therefore, a profoundly moral imagination: the easier it is for you to imagine walking in someone else's shoes, the more difficult it then becomes to do that person harm.

That was then and this is now. The House put $50 million in additional funding for the National Endowment for the Arts, which the Senate took out with former Republican Presidential candidate Senator John McCain stating. While the money was restored, the $150 appropriation by the House for infrastructure for the Smithsonian was sliced down to $25 million. Robert Lynch is a bit more optimistic, tracking other money that arguably can help artists.

Here in Virginia the Virginia Commission for the Arts reported awards to preserve positions in various parts of the state. I'll get into those tomorrow. The library is closing.
Posted by Beth Wellington at 9:10 PM