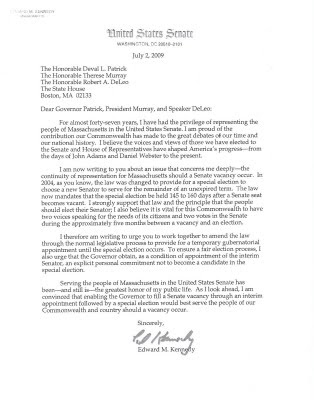 For some reason, when the Boston Globe broke this story August 2o, the author,Frank Phillips, said Kennedy wrote the letter last week and alluded to his non-attendance at his sister's funeral. But, as you can see, the letter was written July 2.

Go figure. As my friend journalist Dan Kennedy (no relation to Ted), whose blog post today referred to the story, responded, when I asked him about the discrepancy in dates,

Damned if I know. Good catch.

The fiasco in filling Obama's seat in the Senate points to the wisdom concerning Kennedy's suggestion that Massachusettes law be amended to allow the governor to fill the seat until an election, but that he should appoint someone who promises not to run in the special election.
Posted by Beth Wellington at 5:55 PM