Do you have to be a liar to sell coal? 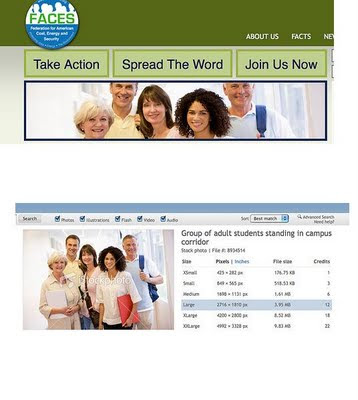 Exhibits B from The Front Porch Blog post of August 26 by my friend JW Randolph.

"The Federation for American Coal, Energy and Security (FACES of Coal)." the latest "grassroots" organization to join the public conversation on behalf of the coal industry, appears to be a project of the K-Street public relations firm, the Adfero Group, one of industry's most accommodating voices in Washington, D.C.

His post included a screenshot of the website showing a the owner of a flower shop with copy about how coal boosted the economy. I've included it at the bottom of this post.

Then, August 26, at 9:50 PM, folks on the Friends of the Mountains list received an email from Jamie Goodman at Appalachian Voices referenced, "buying 'grassroots' coal group members on stock photo websites!" She listed three links to the Faces of Coal website along with corresponding royalty-free photos from IStockphotos.com.

Don't you love it when you can find ready-made members on a stock photography website?...Couldn't find the rest as easily, but i know they are there. Can smell an iStock photo from a mile off.

For instance, the above screenshot from the website shows a group of folks with the caption:

The Federation for American Coal, Energy and Security (FACES of Coal) is an alliance of people from all walks of life who are joining forces to educate lawmakers and the general public about the importance of coal and coal mining to our local and national economies and to our nation’s energy security. In addition to keeping tens of thousands of people employed in good-paying jobs, coal is the lifeblood of our domestic energy supply, generating half the electricity consumed in the United States today.

Take action and join us today!

Except, that actually they're from a stock photo labeled "Group of adult students standing in campus corridor."

So I was really happy to see the story had made it to Rachel Maddow Show August 27.
And when Brad Johnson of Grist and the Wonk Room posted his research on the ad company behind the shenanigans on August 28. It seems that Adfero Group spun off its online communications arm as Fireside 21. And then, Adfero

Like tossing the hot potato of coal is supposed to confuse us? Of course, Maddow's report on the FACES of Coal was just her latest coverage of coal lies. August 4 and 5, she had featured Bonner & Associates and how the company said it had made a "mistake" and forged letters from local minority rights groups opposing the ACES climate bill to Charlottesville U.S. Congressman Tom Perriello. From August 4th, when her main topic was the astroturf groups organized to disrupt Town Halls on health care:

Let me give you another example of what's being passed off as politics right now by lobbying interests on the political right.

When the climate change bill came before the House last month, the Democratic congressman named Tom Perriello of Virginia received a letter purportedly from a nonprofit Hispanic group in his district, and the letter urged him to oppose the cap-and-trade legislation. He received similar letters from what were purportedly his local branches of the NAACP. Only, these letters weren't actually from that Hispanic group in his district or the NAACP. A Republican lobbying firm in Washington has admitted to impersonating those local nonprofits and sending Congressman Perriello fake letters to get him to oppose the climate change legislation.

Congress is now investigating this incident.

This is a lobbying firm. This is the establishment. This isn't a lone nutjob passing himself of as a group he doesn't belong to. This is well-paid lobbyists doing this as a strategy.

I had sent July 31 tweet alerting Maddow to Brian McNeill's story in the Charlottesville Daily Progress that date breaking news of the skulduggery, but who knows how she came by it.

The latest on Bonner is a hoot, too. August 28, Justin Elliot of Talking Points Memo revealed that Bonner had now announced an ethics policy preventing forged letters. So, we're going to have "clean" astroturf. Come on. Deception is Bonner's middle name. Jack Bonner told the WaPo for a 8/23/94 story that

if you’ve got the money and need some ‘regular people’ to flog your issue, Bonner will find them for you.

And there's more, of course. See the annotated list which hink Progress researcher Victor Zapanta compiled on July 31, 2009. And in the irony of ironies, the American Coalition for Clean Coal Electricity, the coal group which hired Bonner, has dispatched Bonner for its impropriety, according to Amy Harder's August 21 article in the National Journal.

ACCCE did nothing wrong. Looking back, there would be many things we would do differently.

Keep in mind the group knew of the forged letters June 24, before the climate bill came up for a vote. That's long before the story broke and did nothing at the time, according to its own background information supplied for the Congressional investigation:

Based upon information ACCCE received from the Hawthorn Group, it was Bonner and Associates’ own internal process that identified these falsified letters and it was Mr. Bonner who first brought this to the attention of the Hawthorn Group. ACCCE was then made aware of the situation by Hawthorn on June 24, 2009.

In that discussion, we were assured by Hawthorn that senior management with Bonner and Associates had committed to making personal contacts with the affected organizations and the congressional offices who received falsified letters. Throughout this process, ACCCE has been told that Bonner and Associates had made contacts with the affected organizations and was continuing to make contacts with congressional offices. It was only by reading last Friday’s media accounts that we learned that these matters had not been satisfactorily resolved.

Maddow summed it up on August 27:

You know, when the coal industry‘s P.R. firm stole letterhead from the NAACP and use it to write letters to Congress, to make it look the NAACP was against cap-and-trade, political science textbooks all across the country had to be scrapped and rewritten to account for the new, most blatant, fake grassroots corporate P.R. effort ever. Eventually we‘ll just scrap political science textbooks altogether and just send everyone to advertising school instead.

As Dave Cooper pointed out in an email with a link to the Mountain Justice training camp in Pipestem in May 2009.

Want to see some REAL people?

So, I wonder, is this woman from the stock shot in the flower shop actually a job provided by the coal economy? Yeah, right. 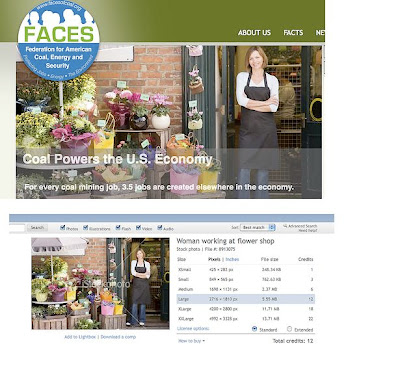 Posted by Beth Wellington at 7:07 PM