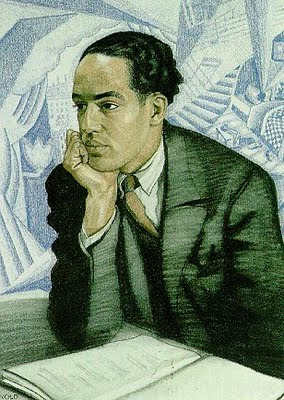 Pastel drawing of Hughes by Winold Reiss (bio) via the University of Illinois at Urbana-Champaign's Modern American Poetry series entry on Hughes.  I first published this post on August 24, 2009 and updated it on December 5, 2013, after I found an illustrated version of the poem, "Advertisement for the Waldorf-Astoria" and a recording of Hughes reading "Big Buddy." There is so much additional information now available on Langston Hughes and his  radicalism that I will be writing a second post.

Since I wasn't born yet during the thirties, when I heard the term "Harlem Renaissance" it merely conjured the idea of artistic revival. But it's obvious from the following poem and Hughes's central role in its history that the Renaissance was a lot more about rage and revolution than I had thought.


Advertisement For The Waldorf-Astoria by Langston Hughes

Fine living . . . a la carte?
Come to the Waldorf-Astoria!

LISTEN HUNGRY ONES!
Look! See what Vanity Fair says about the
new Waldorf-Astoria:

"All the luxuries of private home. . . ."
Now, won't that be charming when the last flop-house
has turned you down this winter?
Furthermore:
"It is far beyond anything hitherto attempted in the hotel
world. . . ." It cost twenty-eight million dollars. The fa-
mous Oscar Tschirky is in charge of banqueting.
Alexandre Gastaud is chef. It will be a distinguished
background for society.
So when you've no place else to go, homeless and hungry
ones, choose the Waldorf as a background for your rags--
(Or do you still consider the subway after midnight good
enough?)

ROOMERS
Take a room at the new Waldorf, you down-and-outers--
sleepers in charity's flop-houses where God pulls a
long face, and you have to pray to get a bed.
They serve swell board at the Waldorf-Astoria. Look at the menu, will
you:

Have luncheon there this afternoon, all you jobless.
Why not?
Dine with some of the men and women who got rich off of
your labor, who clip coupons with clean white fingers
because your hands dug coal, drilled stone, sewed gar-
ments, poured steel to let other people draw dividends
and live easy.
(Or haven't you had enough yet of the soup-lines and the bit-
ter bread of charity?)
Walk through Peacock Alley tonight before dinner, and get
warm, anyway. You've got nothing else to do.

I might have figured that Hughes was involved in rage and revolution, given the central role he is given by the Split This Rock Poetry Festival in Washington, DC, which  celebrates poetry of "witness and provocation" and calls poets to "a greater role in public life."  The festival takes its name from  a line from Hughes's poem “Big Buddy” from The Collected Poems of Langston Hughes (p.240).


Bus Boys and Poets, a restaurant/bookstore/performance space/community center for progressives, founded in the U Street neighborhood of Washington, DC in 2005 by activist, artist and restaurateur Andy Shallal also takes its name from a reference to Hughes's life.  Shallal named his business  in honor of Hughes, who (like Duke Ellington and Thurgood Marshall) lived in the neighborhood. Hughes had worked as a busboy in the 1930s at the Wardman Park Hotel (about two miles to the West off of Rock Creek Parkway) , prior to gaining recognition as a poet and then moving to Harlem. Poet Kwame Alexander has a piece on Hughes in DC on the site Beltway Poets.

Scott Fowler agrees with me about the connection between radicalism and the Harlem Rennaissance:

The Harlem Renaissance marks the point when blacks began to stop denying the
blackness inside themselves and began denying the god that put their race through great trial and tribulations. Langston Hughes was at the forefront of this involvement. He understood that it didn't matter what others thought of the Negro experience. He knew that as long as blacks embraced their heritage, and took pride from it, society could be changed.

In fact, "Advertisement for the Waldorf Astoria" first appeared as a mock advertisement, with illustrations Walter Steinhilber in the December 1931 edition of  New Masses. You can read the entire poem in 1994 hardcover version of The Collected Poems of Langston Hughes (p. 143).  It's also available online in a selection advertising the 1995 paperback edition
here. 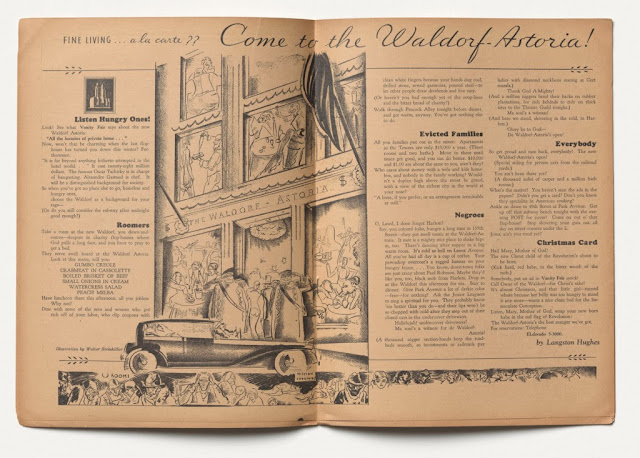 (UPDATE:  I found this illustrated version on the site for the exhibition Grand Hotel produced for the Vancouver Art Gallery, which was open to the public from April 13 - September 15, 2013.)


In an January 2009 article in Poetry Magazine "On Newly Discovered Langston Hughes Poems,"
Rampersad talks about the suppression of Hughes in general:


By the end of 1933, in the depths of the crisis, he had composed some of the harshest political verse ever penned by an American. These pieces include "Good Morning Revolution" and "Columbia," but above all, "Goodbye Christ." Here the speaker of the poem ridicules the legend of Jesus in favor of the radical reality of Marx, Lenin, "worker," "peasant," "me." Around 1940, under severe pressure from conservatives, Hughes repudiated "Goodbye Christ" as an unfortunate error of his youth. However, in 1953 he was again forced to condemn this poem when he appeared, by subpoena, before Senator Joseph McCarthy's infamous subcommittee probing allegedly "un-American" activities by some of our leading scholars, scientists, and artists. At his core, Hughes was a lyric poet entranced by the charms and mysteries of nature. Nevertheless, political protest was a key aspect of his writing virtually from his high-school days, when many of his classmates were the children of Jewish and Catholic immigrants from Europe who taught him the importance of protesting against injustice. A stirring voyage to colonial Africa in 1923, when he was barely twenty-one, only intensified his commitment to protest art.

Hughes certainly suffered right wing propaganda against him, as this flyer by Huey Long buddy Gerald L.K. Smith and publisher of The Flag and the Cross illustrates: 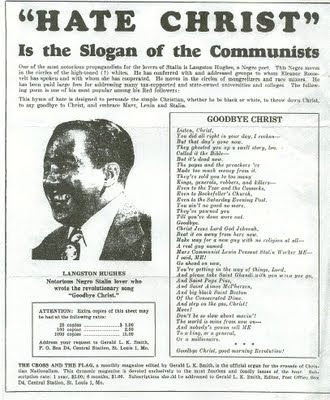 The flyer also points to how ferment on the right is nothing new. (In case any of my younger readers have not read about the McCarthy hearings or missed my post on Cointelpro.)

I'm not sure why his political poems were "newly discovered" since Hughes explains the genesis of "Advertisement" in his autobiography The Big Sea (1940, reissued by Hill and Wang in 1993):


In the midst of that depression, the Waldorf-Astoria opened. On the way to my friend's home on Park Avenue I frequently passed it, a mighty towering structure looming proud above the street, in a city where thousands were poor and unemployed. So I wrote a poem about it called "Advertisement for the Waldorf-Astoria," modeled after an ad in Vanity Fair announcing the opening of New York's greatest hotel. (Where no Negroes worked and none were admitted as guests.)

The hotel opened at the very time when people were sleeping on newspapers in doorways, because they had no place to go. But suites in the Waldorf ran into thousands a year, and dinner in the Sert Room was ten dollars! (Negroes, even if they had the money, couldn't eat there. So naturally, I didn't care much for the Waldorf-Astoria.)


Hughes also wrote essays, including one of my favorites, "Are You Spanish," published in the Chicago Defender (September 18, 1943--see page 50 of Langston Hughes and the Chicago Defender: Essays on Race, Politics, and Culture, 1942-62, U. of Illinois Press, 1995, edited by Christopher C. De Santis of Illinois State (his webpage).

In that essay, Hughes, suggested that students demand to be served in train dining cars as they returned to college in the South:


If you have to raise sand to eat there, then raise sand. Be firm and logical about it. Don't use bad language. Don't threaten. Simply say you are an American.

Here's the Moses Asch (bio) recording from 1945  of Hughes reading the poem  "Big Buddy," which inspired the name for the Split This Rock poetry festival.   (starting at 4:25).  Asch also recorded much of Woodie Guthrie and went on to found Folkway Records in 1948.

Posted by Beth Wellington at 8:49 PM