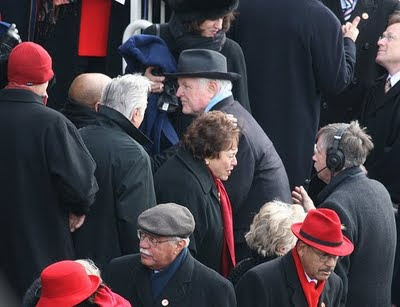 Photo of Teddy at the inauguration on Flickr by "Vidiot"

There are those born to great riches who want wealth and privilege more concentrated. There are those with little who aspire to riches and thus harbor the same beliefs.

Teddy Kennedy, for all his personal failings, wanted something more. As he said at the 2008 Democratic Convention:

For me, this is a season of hope, new hope for a justice and fair prosperity for the many and not just for the few, new hope. And this is the cause of my life, new hope that we will break the old gridlock and guarantee that every American -- north, south, east, west, young, old -- will have decent, quality health care as a fundamental right and not a privilege.

If you'd like to take a look at his statements on various issues, I suggest you turn to the website OnTheIssues. As Ezra Klein, so eloquently put it this morning for the Washington Post:

Ted Kennedy didn't belong to all of us. He didn't even belong to all Democrats. He was not of the party that voted for more than a trillion in unfunded tax cuts but cannot bring itself to pay for health-care reform. He was not of the party that fears the next election more than the next failure to help America's needy. Rather, he belonged to the party of Medicare and Medicaid, the Americans With Disabilities Act and the Children's Health Insurance Program, the Civil Rights Act and immigration reform. He belonged to the party that sought to advance the conditions and opportunities of the least among us. He was, as Harold Meyerson says, "the senior senator from Massachusetts and for all the excluded in American life."

McClatchy has a piece up about the effect of Kennedy's death on passage of health care reform:

Securing universal health care coverage for Americans was a decades-long quest that eluded Sen. Edward Kennedy. In the wake of his death, however, several key Democrats on Wednesday saw a chance to break what's become this year's stalemate by invoking his legacy and last wishes.... However, it was also likely that without Kennedy, a deal would be even harder to get.

As the administration jeopardizes its mandate from last November, wavering on health care, union card check, civil liberties and the environment, maybe it is time for them to remember that without the "liberal Lion's" endorsement, Obama might not have gained the nomination. Maybe it's time to get serious about trying to make things a little more just for "all the excluded in American life," a category, which sadly, applies to more and more of us.
Posted by Beth Wellington at 11:23 AM