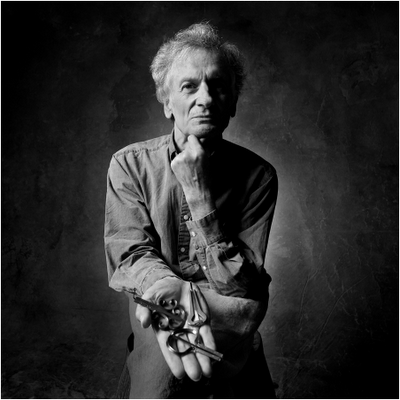 Studio protrait of Mike Seeger taken in 2005 in Nashville as part of a series by Jim McGuire (bio, website, email) and used by his kind permission.   "Reproduction without the expressed written consent of Jim McGuire is prohibited, immoral, and downright dangerous."

Mike Seeger is gone (sigh) from multiple mylenoma too, too early a week after his 75th birthday.  Last year marked the death of Utah Phillips.  I didn't know Phillips personally--although I have friends who did-- but Mike was a very big part of the music and dance community here--never acting like he had a national reputation or even that he was anything special at all.  In fact, I while I met Mike at square dancing, I thought he was just someone who looked remarkably like Mike Seeger until he told me "that's because I am."

So many of us enjoyed his festival Rockbridge Music and Dance Festival in Buena Vista.  He took sick so suddenly.  It was just July 24 when I wrote  Ray York,  the volunteer coordinator at the Lyric as soon as a November 18 concert was announced,  And Ray had written back July 27 to tell me I was on the list. Shortly thereafter we got word that he had had to cancel.  And, of course he was gone, before there could even be another festival this September.

While his older (half-) brother Pete and younger sister Peggy might be better known for their music on behalf of social justice and Mike for his crusading on behalf of "the true vine" of old time music, I just came across the 1960 album Songs of Work and Freedom with Mike playing guitar and banjo,  although the cover only credits Joe Glazer (who dubbed himself labor's troubador in his autobiography) and Charlie Byrd .  While the album is out of print, there are used copies available. Truth to tell, I always thought of Charlie Byrd as a jazz guitarist (having once gotten to hear him play live, I think it was in Annapolis).  It turns out the Mike started studying jazz guitar with Byrd when he was 18.  By 20 he had converted to banjo and this album would have come out about seven years later.

Here's a great interview from August 2003 with Mike at his house in Lexington, Virgina. Marc Fields (bio, email), producer of the film-in-progress, The Banjo Project posted  it 2006.
Posted by Beth Wellington at 7:00 PM