Obama and those health care emails... 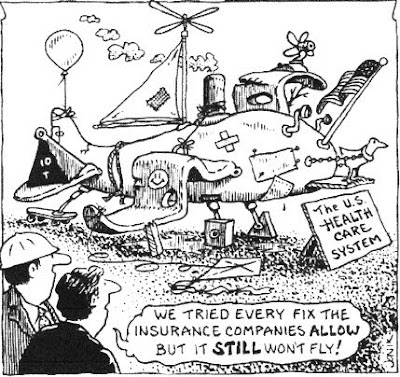 Cartoon by John Jonik of Philadelphia (email, bio. His essays on health reform are here and here.)

read w. interest Michael Bush's "Hail to the Spammer in Chief: Where Obama Went Wrong coming out in tomorrow's Ad Age about Obama's use of GovDelivery to send unsolicited emails on health care and reviewed it on NewsTrust and wrote an entry for SourceWatch.

GovDelivery's website indicates it was established in 1999 is "the world's leading provider of government-to-citizen communication solutions" which provides Email and Digital Subscription Management platform. It lists a number of federal, state and local clients.

On August 22, Fox News reported that the Obama White House had acknowledged its use of the provider for emails sent out under the name of senior White House advisor David Axelrod on health care reform. Some individuals had complained that they had received unsolicited email and some Republican members of Congress and conservative news sources attributed their listing to an "enemies list" compiled by those who had reported questionable claims about the health care bills to the email address flag@whitehouse.gov. Fox reported that the WhiteHouse had disabled the email address on August 17 and that the admnistration's own theory was that outside groups had enrolled individuals without their permission at WhiteHouse.gov. It pointed out that GovDelivery is non-partisan and is used by Texas Gov. Rick Perry and Indiana Gov. Mitch Daniels, both Republicans.

The White House had posted a statement on its blog August 17, saying,"It has come to our attention that some people may have been subscribed to our email lists without their knowledge –- likely as a result of efforts by outside groups of all political stripes -– and we regret any inconvenience caused by receiving an unexpected message. We’re certainly not interested in anyone receiving emails from the White House who don’t want them. That’s one reason why we have never -- and will never -- add names from a commercial or political list to the White House list.

"At the bottom of every message is a link to unsubscribe from emails that anyone can use to avoid this in the future. We have also implemented measures on WhiteHouse.gov to boost the security of the mailing list and we will carefully evaluate signups already received to work toward preventing this problem in the future."