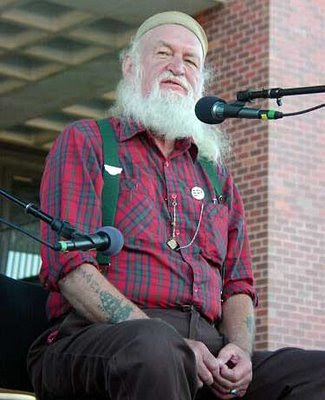 Photo of Phillips from a  post by Steve Ide of Wicked Local (MA).

I wrote about late great Utah Phillips on January 20 of last year, when friends and unions members (not mutually exclusive groups) were fund raising because chronic and serious heart problems had left him unable to travel or perform. He died on May 23.

As one of his performing parters, Rosalie Sorrels said,

He was like an alchemist. He took the stories of working people and railroad bums and he built them into work that was influenced by writers like Thomas Wolfe, but then he gave it back, he put it in language so the people whom the songs and stories were about still had them, still owned them. He didn't believe in stealing culture from the people it was about.