President Bush on the Economy: He's no FDR 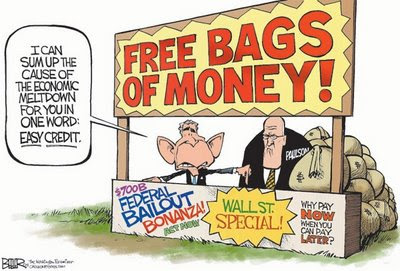 "Bailout Bonanza" by Nat Beeler in the September 26 Washington Examiner.

Given his behavior after 9-11, I cannot imagine Bush saying, as FDR did in his inaugural address on March4, 1933, that we have nothing to fear but fear itself. But look, too, at FDR's rhetoric of concerning the financial sector in that speech:

Only a foolish optimist can deny the dark realities of the moment....Practices of the unscrupulous money changers stand indicted in the court of public opinion, rejected by the hearts and minds of men....This nation is asking for action, and action now....There must be a strict supervision of all banking and credits and investments. There must be an end to speculation with other people’s money. And there must be provision for an adequate but sound currency.

Then look at President Bush's speech this morning on the bail-out plan for the financial sector, the Emergency Economic Stabilization Act. He sought to assure Americans that there is nothing wrong with business as usual and that

over time, much -- if not all -- of the tax dollars we invest will be paid back.

I have learned to supect such promises from this administration. Remember when Deputy Secretary of Defense Paul Wolfowitz testified before Congress on March 27, 2003 regarding Iraq,

Posted by Beth Wellington at 9:49 PM