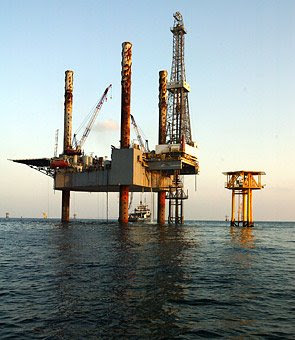 According to The Hill today, the Dems are set to provide an energy bill that allows more drilling. It seems that they are giving into the shift in public opinion to favor drilling after Republicans falsely linked the lack thereof to high gas prices. Although Bush espoused this cause June 18, Bryan Walsh noted in Time that date that

there's a flaw in that logic: even if tomorrow we opened up every square mile of the outer continental shelf to offshore rigs, even if we drilled the entire state of Alaska and pulled new refineries out of thin air, the impact on gas prices would be minimal and delayed at best. A 2004 study by the government's Energy Information Administration (EIA) found that drilling in ANWR would trim the price of gas by 3.5 cents a gallon by 2027. (If oil prices continue to skyrocket, the savings would be greater, but not by much.) Opening up offshore areas to oil exploration — currently all coastal areas save a section of the Gulf of Mexico are off-limits, thanks to a congressional ban enacted in 1982 and supplemented by an executive order from the first President Bush — might cut the price of gas by 3 to 4 cents a gallon at most, according to the Natural Resources Defense Council. And the relief at the pump, such as it is, wouldn't be immediate — it would take several years, at least, for the oil to begin to flow, which is time enough for increased demand from China, India and the rest of the world to outpace those relatively meager savings. "Right now the price of oil is set on the global market," says Kevin Lindemer, executive managing director of the energy markets group for the research firm Global Insight. President Bush's move "would not have an impact."