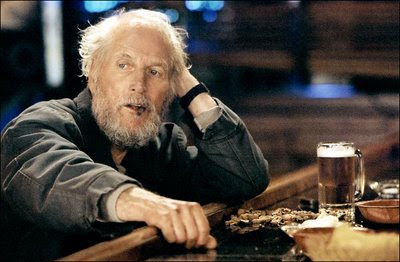 Paul Newman is one of my favorite actors and I imagine I would have liked him, were I to have met him (he and his widow Joanne Woodward shared a home in the same CT town where my cousins grew up.)

I don't write much about film stars, but I think he was something more, a mensch, and I thought I'd post some photos from his career as a leading man who was really a character actor and thus aged gracefully on screen because he was not afraid to show his years.  Above is Newman in his last screen role, as the irascible reprobate Max Roby, in Empire Falls, a 2005 HBO movie based on Richard Russo's novel (Photo by Demmie Todd) 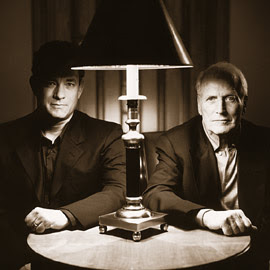 Photo of Newman as the Irish gangster John Rooney in Road to Perdition (2002), based on the graphic novel by Max Allan Collins and Richard Piers Rayner. 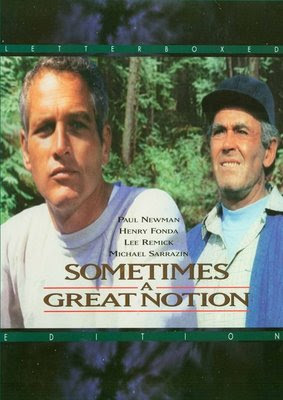 Newman on the poster for Sometimes a Great Notion (1971), which he directed, based on Ken Kesey's novel.  This was one of my favorite books and I didn't know about the film until I ran across it late one night on tv.

Amidst concerns about his failing health, Vanity Fair published actress and biographer Patricia Boswoth's "The Newman Chronicles" in its September issue, lauding the achievements of his life beyond mere stardom.

UPDATE: I love this story that Victor Navasky writes on October 1, for the October 20, 2008 issue of The Nation, of approaching Newman for financial help for the magazine...

It all started in 1994, when Arthur Carter, who for eight years had subsidized and published The Nation, which was losing about $500,000 a year, turned the magazine over to me.

Since I didn't have $500,000 to lose--that year or any other year--I came up with a four-year plan. My idea was to find three shareholders who would put up $1 million each. That way we would have enough money to cover our losses, pay Carter off and invest in our future until the magic moment of self-sufficiency arrived (or so we hoped).

I called my friend E.L. Doctorow, who was also a friend of The Nation and, perhaps most important, a friend, or at least an acquaintance, of Paul Newman, who had returned from World War II to Kenyon College as a senior when Doctorow was a freshman. Could he arrange a meeting?

Two and a half months later, I found myself at dinner at a small Italian restaurant in the East Eighties with Doctorow, Newman and Joanne Woodward. Normally, I would have been thrilled to have dinner with Newman and Woodward, but my fundraising experience told me that when a "mark" (in the spirit of The Sting, let's think of Newman as a mark here) brings his wife along, all too often no funds get raised. So, much as I admired Woodward, I worried about her presence.

Dinner began with Newman and Doctorow reminiscing about Kenyon. Doctorow reminded Newman that he had been a patron of the small laundry business Newman had started in competition with the college. He had made a deal with a local laundry that he'd collect student laundry and get paid. So he opened a store in opposition to the campus laundry. Then he got the bright idea of putting a keg of beer in the store window; any student who came in with laundry got a free beer. College authorities began to wonder why their laundry business was going down. When they found out, that was the end of Newman's promising career in laundry--but not, as his all-natural food company, Newman's Own, was later to make clear, his entrepreneurial instincts.

Then Newman turned to me and said, "So, Professor, what's the damage? What can I do for you?"

When I told him what I had in mind, he said, "That's very rich."

At which point Woodward piped up and observed, "You're very rich."

I shouldn't have worried.

Posted by Beth Wellington at 7:02 PM