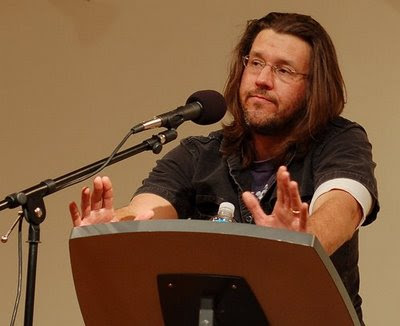 Photo of David Foster Wallace from a 2006 reading by Steve Rhodes.

Twenty years after my own graduation, I have come gradually to understand that the liberal arts cliché about teaching you how to think is actually shorthand for a much deeper, more serious idea: learning how to think really means learning how to exercise some control over how and what you think. It means being conscious and aware enough to choose what you pay attention to and to choose how you construct meaning from experience. Because if you cannot exercise this kind of choice in adult life, you will be totally hosed.

David Foster Wallace's 2005 commencement address at Kenyon College, like much of his writing, combined sagacity with the colloquial. And now the novelist, short story writer, generous teacher and gonzo journalist is gone. He hanged himself on September 12.

In a 2003 interview with The Believer he described his writing process,

My basic MO is that I tend to start and/or work on a whole lot of different things at the same time, and at a certain point they either come alive (to me) or they don’t. Well over half of them do not, and I lack the discipline/fortitude to work for very long on something that feels dead, so they get abandoned, or put in a trunk, or stripped for parts for other things. It’s all rather chaotic, or feels that way to me. What anybody else ever gets to see of mine, writing-wise, is the product of a kind of Darwinian struggle in which only things that are emphatically alive to me are worth finishing, fixing, editing, copyediting, page-proof-tinkering, etc.

In 2000, he had written an essay on the presidential race for Rolling Stone, "The Weasel, Twelve Monkeys And The Shrub: Seven Days In The Life Of The Late, Great John McCain," which caused Slate political reporter Christopher Beam (email) to ponder August 14 in his blog The Trailhead, "What Would David Foster Wallace Make of McCain 2008?" It's a really nice reprise of the article and has a postscript which answers the question in the title, citing a a May 31, 2008 email interview with Christopher John Farley in the WSJ:

The essay quite specifically concerns a couple weeks in February, 2000, and the situation of both McCain [and] national politics in those couple weeks. It is heavily context-dependent. And that context now seems a long, long, long time ago. McCain himself has obviously changed; his flipperoos and weaselings on Roe v. Wade, campaign finance, the toxicity of lobbyists, Iraq timetables, etc. are just some of what make him a less interesting, more depressing political figure now—for me, at least. It's all understandable, of course—he's the GOP nominee now, not an insurgent maverick. Understandable, but depressing. As part of the essay talks about, there's an enormous difference between running an insurgent Hail-Mary-type longshot campaign and being a viable candidate (it was right around New Hampshire in 2000 that McCain began to change from the former to the latter), and there are some deep, really rather troubling questions about whether serious honor and candor and principle remain possible for someone who wants to really maybe win. I wouldn't take back anything that got said in that essay, but I'd want a reader to keep the time and context very much in mind on every page.

DFW also wrote about 9-11 for the October 25, 2001 Rolling Stone in "The View from Mrs. Thompson's" and would write about politics again in his introduction to the Best American Essays of 2007 explaining his selections,

Here is an overt premise. There is just no way that 2004’s reelection could have taken place — not to mention extraordinary renditions, legalized torture, FISA-flouting, or the passage of the Military Commissions Act — if we had been paying attention and handling information in a competent grown-up way. ‘We’ meaning as a polity and culture. The premise does not entail specific blame — or rather the problems here are too entangled and systemic for good old-fashioned finger-pointing. It is, for one example, simplistic and wrong to blame the for-profit media for somehow failing to make clear to us the moral and practical hazards of trashing the Geneva Conventions. The for-profit media is highly attuned to what we want and the amount of detail we’ll sit still for. And a ninety-second news piece on the question of whether and how the Geneva Conventions ought to apply in an era of asymmetrical warfare is not going to explain anything; the relevant questions are too numerous and complicated, too fraught with contexts in everything from civil law and military history to ethics and game theory. One could spend a hard month just learning the history of the Conventions’ translation into actual codes of conduct for the U.S. military . . . and that’s not counting the dramatic changes in those codes since 2002, or the question of just what new practices violate (or don’t) just which Geneva provisions, and according to whom. Or let’s not even mention the amount of research, background, cross-checking, corroboration, and rhetorical parsing required to understand the cataclysm of Iraq, the collapse of congressional oversight, the ideology of neoconservatism, the legal status of presidential signing statements, the political marriage of evangelical Protestantism and corporatist laissez-faire . . . There’s no way. You’d simply drown. We all would. It’s amazing to me that no one much talks about this — about the fact that whatever our founders and framers thought of as a literate, informed citizenry can no longer exist, at least not without a whole new modern degree of subcontracting and dependence packed into what we mean by ‘informed.’

Here are some of his stories from the New Yorker:
From Gourmet:
From The Atlantic:
From Esquire:
And from Harper's:
And here are some fans who have shared uncollected DFT:

Posted by Beth Wellington at 6:27 PM