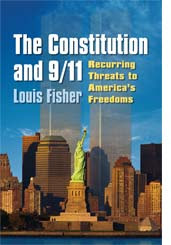 The announced purpose of U.S. antiterrorist policies after 9/11 was to bring democracy and the rule of law to the Middle East. At home, those values were regularly threatened by illegal, unconstitutional, secret, and unaccountable programs. The Bush administration claimed that terrorists hate America for its freedoms, yet its actions jeopardized those freedoms and brought the reputation of the United States lower in the eyes of the world.

On October 17, 2008, those of you in VT or nearby states might want to be over at the Chase Community Center of the Vermont Law School in South Royalton to attend the Vermont Law Review Symposium: Examining Our Priorities: Balancing National Security With Other Fundamental Values, where Fisher will be the keynote speaker.

He's a constitutional law scholar with the Library of Congress, whom I got to hear speak in DC, along with Charlie Savage. Panel topics will include immigration, environmental law, protecting library records, and the right to dissent. Another speaker will be reporter Will Potter on "The Threat of Unpopular Ideas,” including domestic “eco-terrorism” and “domestic terrorism” laws like the Animal Enterprise Terrorism Act.
Posted by Beth Wellington at 11:31 PM